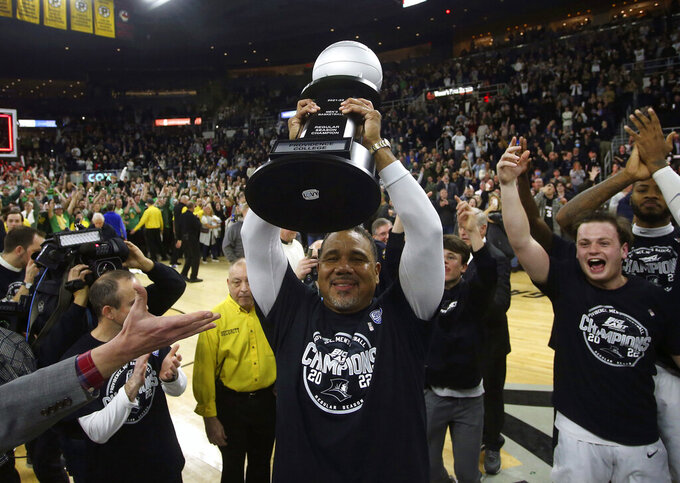 NEW YORK (AP) — For the past four decades, the Providence Friars have been coming to Madison Square Garden to play the Big East Tournament. But in a sense, they've never really been here before.

As the conference celebrates 40 years at “The World's Most Famous Arena,” the 11th-ranked Friars enter as regular-season champions for the first time following an unexpected thrill ride that's captivated tiny Rhode Island.

“The letters I've gotten from families, from season-ticket holders, from alums — it's really rejuvenated a city, coming out of the pandemic. Everybody’s just so excited," said coach Ed Cooley, who grew up in Providence. “It really has connected a bunch of bridges.”

It's not as though Providence has no proud history. The school made Final Four appearances under Hall of Fame coaches Dave Gavitt (1973) and Rick Pitino (1987), and owns a pair of Big East Tournament titles (1994, 2014).

But the Friars, a founding member of the Big East in 1979, had never even won a share of the regular-season crown until this season. Every other charter institution — plus Villanova and Pitt, which both joined the league in the early 1980s — had done so by 1992.

It took Providence another 30 years.

“It’s great what they’ve done. But yesterday’s news is a conversation," Cooley said about his veteran group, picked seventh in the Big East preseason poll. "The present is what we’re concerned with and where we’re trying to go.”

Standing in their way at MSG — with full crowds finally back in the building — will be five or six other teams likely headed to the NCAA Tournament, including No. 20 UConn, Creighton, Marquette and Seton Hall.

Atop that list is eighth-ranked and second-seeded Villanova (23-7, 16-4 Big East), led by its terrific backcourt tandem of Collin Gillespie and Justin Moore. The Wildcats won both meetings this season with the Friars (24-4, 14-3), who had three challenging conference games canceled because of COVID-19 protocols.

Villanova has ruled the Big East since the league realigned before the 2013-14 season, finishing at least tied for first seven times in nine years and winning two national championships under coach Jay Wright. The Wildcats had won three straight conference tournaments and four of five before getting upset in the quarterfinals last year by eventual champion Georgetown.

“Villanova to me is still the example. They are a blue blood,” Cooley said.

No wonder Providence forward Justin Minaya acknowledged he and his teammates would love another shot at 'Nova in the title game on Saturday night.

“Yeah, definitely," he said. "We definitely would be excited for that matchup.”

It all tips off Wednesday with a tripleheader. No. 8 seed Xavier, desperately clinging to NCAA Tournament dreams, faces ninth-seeded Butler in the late-afternoon opener for a chance to play Providence in the first of four quarterfinals on Thursday.

After losing their regular-season finale at Villanova, the Friars will have eight days off in between — most other Big East teams had two or three games during that stretch.

“I think the rest will help us,” Cooley said. “I think we’re as battle-tested as anyone.”

Due to coronavirus restrictions, no tickets were made available to the public last year and Madison Square Garden was mostly empty throughout the tournament save for some family and friends of the teams.

The 2020 edition was called off at halftime of the first quarterfinal because of the outbreak.

But this week, the unmistakable buzz of a Big East Tournament in busy Midtown Manhattan returns. The top three seeds and five of the top seven are located a train ride away, pulling into Penn Station right underneath MSG. Sellout crowds are expected, with more than 95% of tickets already snapped up by Monday.

Cooley called the annual event "a gem” and "the best postseason tournament in all of America.”

“The smell of the streets and the hot dogs and the vendors on the road, and the people wearing the school colors — and everybody excited about walking into Madison Square Garden,” he said.

After rejoining the league last season, third-seeded UConn (22-8, 13-6) is a legitimate threat to take home its first Big East Tournament title since 2011.

The talented Huskies, who have won six of seven, are paced by a pair of first-team all-conference players in guard R.J. Cole and big man Adama Sanogo. Plus, their legion of local, vocal fans gets its first chance in 10 years to rock The Garden at this event.

“Our goal was to win the regular-season championship, but we didn’t get that,” senior guard Tyrese Martin said. “There’s still another ring to get."

No. 4 seed Creighton (20-10, 12-7), with no starters back from the Sweet 16 team that got blown out in last year's Big East championship game, has been a notable surprise behind Division II transfer Ryan Hawkins and 7-foot-1 sophomore Ryan Kalkbrenner, the Big East defensive player of the year.

Not to mention point guard Ryan Nembhard, who went down with a season-ending wrist injury last month. Still, he was one of three Bluejays on the conference's all-freshman team.

Creighton seems a safe bet for the NCAA Tournament, despite a curiously low NET ranking (66). The Bluejays, who are 0-3 in Big East title games since joining the league in 2013-14, open against fifth-seeded Marquette in the second quarterfinal Thursday afternoon.

Another surprise with an overhauled roster this season, Marquette (19-11, 11-8) has flourished under new coach Shaka Smart, who makes his Big East Tournament debut after stops at Texas and VCU, where he guided the underdog Rams to the 2011 Final Four.

Coming off the worst regular season in Big East history, coach Patrick Ewing and defending champion Georgetown (6-24, 0-19) try to stop a school-record 20-game losing streak Wednesday night against Jared Rhoden and No. 6 seed Seton Hall (20-9, 11-8), perhaps the best prospect among the lower seeds to reel off four wins in four days on the way to a title.

When Ewing signed to play at Georgetown and Chris Mullin at St. John's, the fledgling Big East decided it was time to take its tournament to New York City. Mullin and Hall of Fame coach Lou Carnesecca led the Johnnies to the first championship at MSG in 1983 — and it's been a perfect marriage of building and basketball ever since.

No other conference tournament has stayed so long in one venue. The hardwood stage, only blocks from Broadway, has been an indelible part in a string of unforgettable college basketball moments and players: Pearl Washington, Ray Allen, Kemba Walker, and the six-overtime game between UConn and Syracuse, to name a few.

“I have no doubt the Big East Tournament could be successful in the Midwest, but it wouldn’t be the same," Ackerman said.