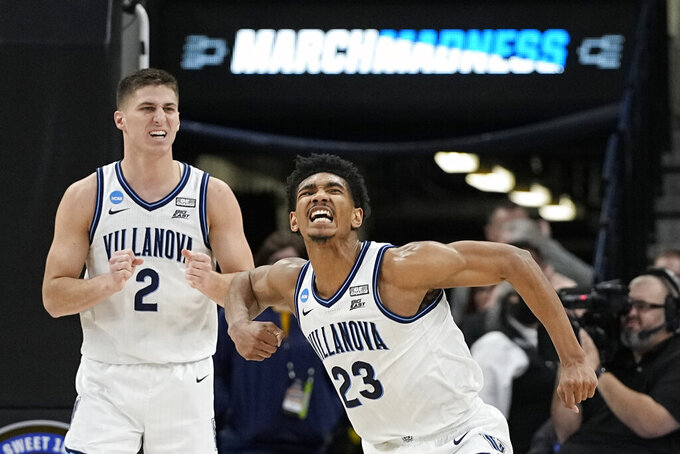 Villanova forward Jermaine Samuels celebrates after scoring with guard Collin Gillespie during the second half of a college basketball game against Michigan in the Sweet 16 round of the NCAA tournament on Thursday, March 24, 2022, in San Antonio. (AP Photo/David J. Phillip)

SAN ANTONIO (AP) — Jermaine Samuels and Collin Gillespie were both on the floor for the final seconds of Villanova’s national championship game victory four years ago. They were true freshmen on a title team with five NBA-bound players.

Now they are fifth-year seniors leading the Wildcats, who are in another NCAA Final Four after Samuels was the South Region MVP and third-team AP All-America point guard Gillespie made a clutch shot late in the regional final.

“It’s crazy how things have come full circle,” Samuels said. “Back then, it was amazing to watch those guys from the sidelines. I had front-row tickets to some of the greatest Villanova basketball players to ever put on the jersey.”

The Wildcats (30-7) have made the Final Four for the third time in the past six NCAA tourneys — they also won it all in 2016. They play in the first national semifinal game Saturday at the Superdome in New Orleans against Big 12 champion Kansas, the only No. 1 seed left in this year’s tourney.

“You take all those experiences with you, and you try to emulate them and be them, and do the things they do and put the work in like they put in and just pray that it works out for you,” Samuels said.

“Those guys taught us a lot. … They’re a big part of the reason that we are the way that we are today,” Gillespie said. “We learned a ton from those guys. Now we play for those guys.”

Brunson, now with the Dallas Mavericks, said he spoke with Gillespie on Sunday, the day after Nova beat Houston 50-44. The Mavs guard also made sure to mention fifth-year forward Dhami Cosby-Roundtree, who played in all 40 games as a true freshman in 2017-18, but sat out last season and hasn't played since December because of multiple surgeries on his legs.

“The whole team is family. But those three in particular, playing with them, I’m really proud of them. They’re special. From a class that really, honestly, besides us, the team, no one really believed in them,” Brunson said after the Mavericks beat Utah on Sunday night, when Paschall got a rare start for the Jazz. “But us, as a family, as a program, we knew what they could do it. They brought us back to the promised land.”

Leading scorer Gillespie (15.6 points per game) and top rebounder Samuels (6.5 per game) are both graduate students and fourth-year starters for coach Jay Wright after the extra season of eligibility all players got because of the COVID-19 pandemic.

Samuels played only 98 seconds combined in two late-game appearances in the 2018 Final Four. He entered the semifinal win over Kansas with 1:28 left, and was only in for the final 10 seconds of the 79-62 victory over Michigan in the title game.

In this NCAA Tournament, Samuels is shooting 63% (26 of 41) while averaging 17½ points and 8½ rebounds a game. He had 16 points and 10 rebounds against Houston, with his 3-pointer on the first shot putting the Wildcats ahead to stay. That was after he scored 22 points in their Sweet 16 win over Michigan.

Gillespie played more than Samuels in that 2018 Final Four, with eight minutes in the semifinal and then 16 in the championship game when he had four points — on 4 of 4 free throws — and five rebounds.

While he is shooting only 33% this postseason, 10 of his 15 made field goals are 3-pointers. His only basket against Houston came when, after a timeout and the Cougars within two, he stepped just inside the arc and hit a long jumper with 5:02 left.

Wright likes how the former and current players stay in touch with each other.