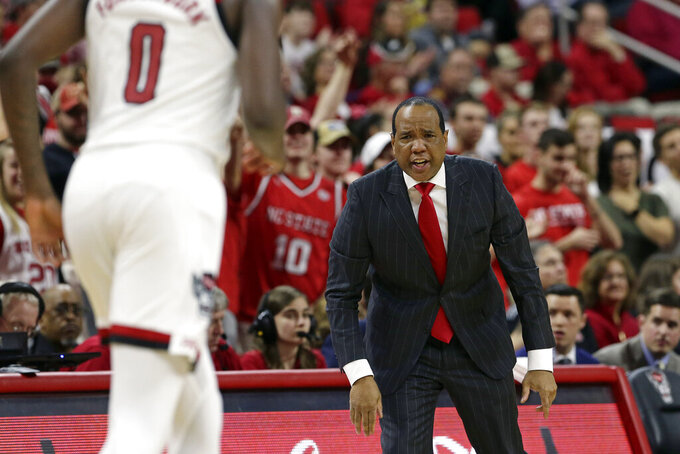 RALEIGH, N.C. (AP) — D.J. Funderburk is developing into a consistent scoring threat inside for North Carolina State. It's a good timing, too, with the Wolfpack getting season-leading scorer C.J. Bryce back from injury to hopefully go on a run in Atlantic Coast Conference play.

Funderburk had 19 points to lead an offense that shot 64% after halftime in the Wolfpack's 80-63 win against Miami on Wednesday night, while Bryce eased back into action after missing four games while being in the concussion protocol.

“I was glad to get C.J. back, not just because he’s our leading scorer but it’s good to have him in the locker room," coach Kevin Keatts said, adding: “We needed some senior leadership on and off the court.”

There were plenty of positives for the Wolfpack (12-5, 3-3 ACC), who went ahead for good with a 10-0 run to close the first half then stretched that lead past double figures on the way to turning this one into a rout.

Funderburk, a 6-foot-10 junior, earned his first start of the season in what Keatts said was a reward for strong recent play. He has now scored in double figures for seven straight games, adding eight rebounds while going 8 of 11 from the foul line against the Hurricanes (10-6, 2-4).

Then there was Bryce, a 6-5 senior who was averaging 16.1 points when he took an inadvertent hit to the face from teammate Manny Bates during a pregame shootaround in December.

Bryce had six points in about 21 minutes of work, checking in at the first media timeout.

“As soon as it happened, I had a headache for a couple of days," Bryce said. “I had light sensitivity, sound sensitivity, even me being in the gym during practice and the buzzer going off was really loud., and it messed with my head a little bit. I’m feeling back to 100% and ready to build off this.”

Chris Lykes scored 20 points to lead Miami, which made just 8 of 27 shots (29.6%) in the opening half. That included going the last 5-plus minutes before the break without a basket, allowing N.C. State to take control a 33-25 halftime lead that would only grow.

“We couldn’t stop them," Miami coach Jim Larranaga said. “We’re not a very good defensive team, haven’t been all year long. When the big guys get in foul trouble, we’ve got no resistance at the rim.”

Miami: The Hurricanes were cold early and didn't warm up much until after N.C. State had asserted control of the game. It didn't help that Miami also made just 3 of 16 tries from 3-point range and had 15 turnovers, while Larranaga pointed to his frontcourt's early foul trouble dealing with the Wolfpack's Funderburk and Bates up front.

“Once you can't stop a team defensively ... and they get the confidence that they can basically just execute whatever they want, it becomes very, very hard," Larranaga said.

N.C. State: The Wolfpack got a strong bounce-back performance after a weekend loss at Virginia Tech, N.C. State’s second league loss in three games since the turn of the new year.

Bryce didn’t attempt a shot in the first half before connecting on a pullup jumper from the foul line with 12:10 left. Minutes later, he lost defender Harlond Beverly with a behind-the-back dribble and hit another jumper just shy of the midway point of the second half. There was also a transition layup off a turnover at the 7:28 mark.

Miami: The Hurricanes host No. 9 Florida State on Saturday.

N.C. State: Clemson, fresh off wins against North Carolina and No. 3 Duke, visits the Wolfpack on Saturday.