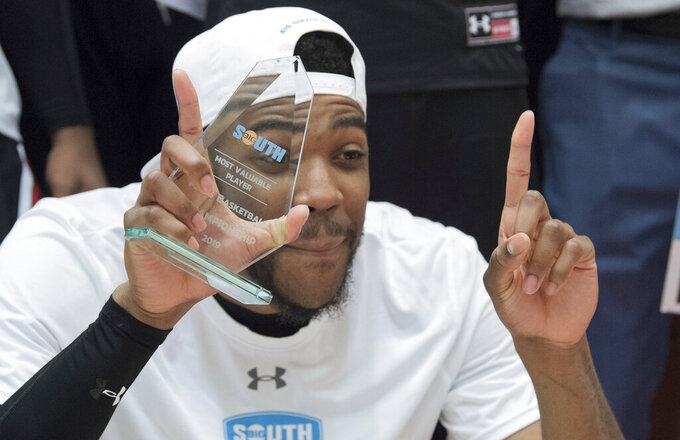 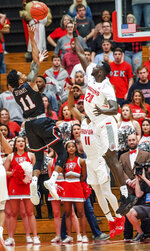 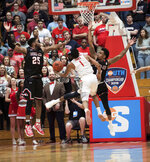 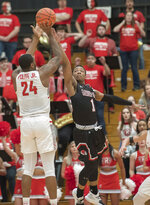 Laster scored a career-high 32 points and Gardner-Webb took command with a first-half run and beat Radford 76-65 on Sunday to win the Big South Tournament championship and earn its first trip to the NCAA Tournament.

Laster was dominant throughout, making 14 of 17 shots and grabbing six rebounds.

"I just knew I had to play hard, needed to play hard," he said, a piece of the championship net stuck inside the adjustable strap on his championship cap. "I just wanted to leave my legacy on the court, leave it all out there, so I just came with that mindset from the jump ball."

Laster had 30 of the Runnin' Bulldogs' first 44 points, including the last five during a 12-0 first-half run and seven during a 13-5 second-half run that gave them a 46-33 lead. He kept the offense humming as the Bulldogs' top scorer, David Efianayi, struggled.

It seemed that way to the Highlanders, too.

"He just dominated the paint and his teammates got him the ball is good positions," said Ed Polite Jr., the Big South defensive player of the year. "Once he got hot and gained confidence, it was hard to take that from him."

Gardner-Webb (23-11) saw its lead shrink to five several times, but each time it scored the next points to hold off the Highlanders. The first time, Jose Perez fed Laster inside for a bucket. Next, Efianayi hit a jumper. Then Perez hit one of the Bulldogs' five 3-pointers.

Donald Hicks had 17 points, Polite 15 and Carlik Jones 14 for Radford (22-11), which was trying to win its fourth conference title and seeking a repeat of last season, when it followed a dramatic championship victory with its first win in an NCAA Tournament game.

The Highlanders never fully recovered after going scoreless for 8:08 in the first half as the Bulldogs built a 20-7 lead. They closed to within five by halftime and again in the second half but couldn't stop the fourth-seeded Bulldogs, who earned their spot in the championship by knocking off top-seeded Campbell on Friday night.

"We tried what we had tried before, which was to come out and punch them in the mouth at the beginning of the second half, but they didn't budge," Jones said.

Gardner-Webb: Laster's huge day helped the Runnin' Bulldogs overcome the absence of Efianayi (18.5 points per game) from the score sheet until he made a pair of free throws with 12:18 remaining. Efianayi followed shortly thereafter with a dunk and carried the scoring down the stretch.

Radford: The game may have been the last at home for Polite, a first-team All-Big South selection who fouled out with 31.6 seconds left. Polite had 15 points and five rebounds and is the only player in league history with 1,500 points, 1,000 rebounds, 175 steals, 175 assists and 150 blocks.

Gardner-Webb: Will play in the NCAA Tournament. The Runnin' Bulldogs, from Boiling Springs, North Carolina, moved up to Division I for the 2002-03 season. NBA Hall of Famer Artis Gilmore and All-Star John Drew are among those who played for the school before then.

Radford: Will hope for a postseason invitation.