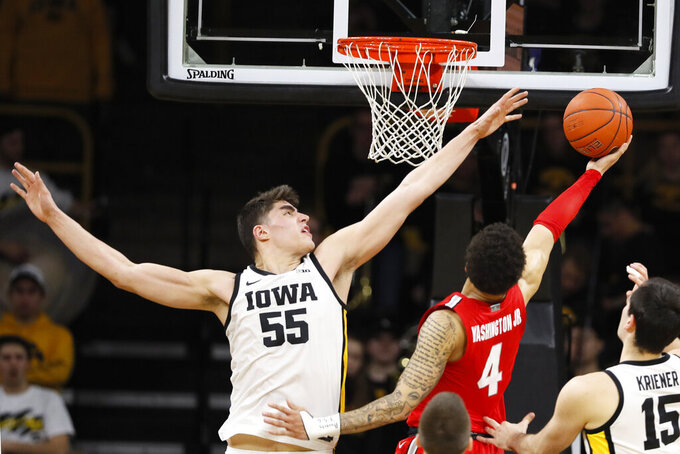 Those two players, coach Fran McCaffery said, made the difference in the game.

Luka Garza scored 24 points, and the 20th-ranked Hawkeyes got strong contributions from reserve guard Bakari Evelyn and forward Cordell Pemsl in securing their ninth win in the last 12 games.

“Cordell and Bakari were phenomenal tonight,” McCaffery said. “No way we win without them.”

“The guys that haven’t really done that a whole lot stepped up and made shots for them,” said Ohio State coach Chris Holtmann.

The Hawkeyes, who didn’t have injured guard CJ Fredrick for the second consecutive game, got production from their starting lineup — Joe Wieskamp had 13 points and Ryan Kriener added 12 before fouling out.

But with a shortened rotation, they needed production from Evelyn and Pemsl. Four games ago, in a win over Illinois, Iowa had zero bench points.

“I think those guys were forced to step up and hit big shots,” Garza said. “It forced guys to be aggressive.”

“I think every game is a new game,” Evelyn said. “Every game has a new flow. I think I was in the flow of the game tonight.”

Pemsl said he knew he could do it.

“It's not like I lost it,” said Pemsl, a fourth-year junior who was suspended for last week’s loss at Indiana after being arrested for driving with a revoked license. “It’s just confidence, it’s all mental.”

It was his 12th consecutive game of 20 points or more in Big Ten play, the longest streak for an Iowa player in 49 seasons and the most by any conference player in the last 20 years.

“He’s a hard matchup,” Holtmann said. “He’s got the ability to really score and play inside.”

“We could never climb back after the first five minutes,” Holtmann said.

Fredrick missed his second consecutive game because of a right ankle injury.

Fredrick, who has 22 starts this season, is averaging 10.7 points per game and is second on the team with 42 3-pointers. He missed two games earlier this season with a stress reaction in his left foot.

Ohio State: The Buckeyes, who had won five of their last six games, lost a little momentum heading into Sunday’s game with Big Ten leader Maryland.

Iowa: The Hawkeyes extended their home winning streak to 12 games and stayed among the top teams in the league standings.

Ohio State: The Buckeyes moved into the poll this week after a four-week absence. This loss could drop them out of the rankings.

Iowa: The Hawkeyes are off until next week, so they should maintain their position, if not improve a spot or two.

Ohio State: The Buckeyes play at home against Maryland on Sunday.

Iowa: The Hawkeyes play at Michigan State next Tuesday.