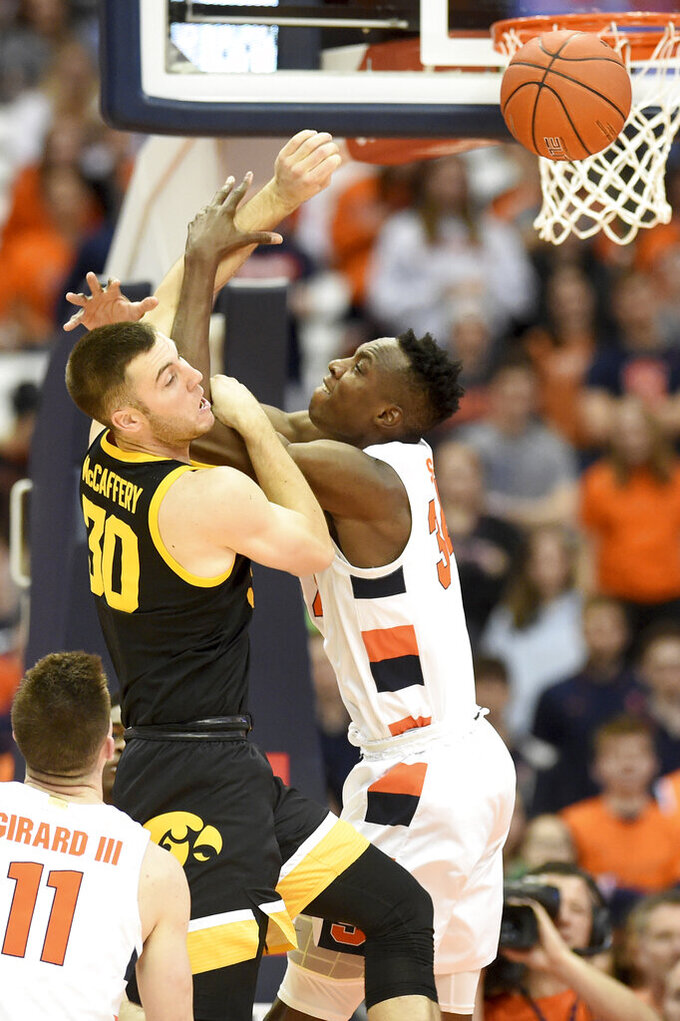 Luka Garza scored 23 points, Jordan Bohannon and Joe Wieskamp added 17 and 13, respectively, and Iowa pulled away in the second half to defeat Syracuse 68-54 on Tuesday night, the Orange’s third straight loss.

Marek Dolezaj led the Orange with 12 points. Elijah Hughes, bottled up by Wieskamp, added a season-low 10 on 3-of-13 shooting.

Syracuse’s 4-4 record represents the program’s worst start in the 44-year tenure of coach Jim Boeheim and the worst start for a Syracuse team since the 1968-69 season when the Orange started 3-5.

In addition to Hughes’s woes, guards Buddy Boeheim and Joe Girard combined to shoot 4 of 18 and 1 of 9 from beyond the arc.

Syracuse is 0-4 this season against major conference teams and has lost to Virginia, Oklahoma State, Penn State and Iowa by an average of 15.6 points.

“It’s obvious to me we could have played better, but those four teams are clearly better than we are. We have to get better,” coach Boeheim said. “We’re not as good as the teams we play. There’s a lot of bad out there and I’m not seeing much good.”

“They’re a young club. I think they’re going to come around,” McCaffery said. “I think they have some really good players. I think some of the guys coming off the bench will eventually develop.

“What I expect to see is, Jim’s been doing this awhile, he’ll get this thing straightened out. It just takes a little bit of time sometimes when you have young guys and you have guys in different roles.”

The game was tied at 33-all early in the second half before Iowa (6-2) went on a 23-5 run to take control. The Hawkeyes were just 11 for 32 in the first half and 5 of 18 from 3, but they got hot in the second, going 15 for 29 and committing just three turnovers after eight miscues in the first half.

UP TO THE CHALLENGE

Joe Wieskamp said he “took on the challenge” of defending Hughes “the best I could,” and he passed with flying colors.

Bohannon was cold from 3 in the first half, going just 1 for 8 from beyond the arc, but he heated up in the second, hitting 4 of 6.

SAY IT AIN’T SO, JOE

Syracuse’s Joe Girard must be wondering if he left his shot back home in Glens Falls, New York. The freshman guard, the highest-scoring high school player in New York state history, is 5 for 23 in the last three games.

For a team that was going to rely on shooting the 3, things have been ugly for the Orange. Syracuse is just 20 for 74 from downtown in the last three games.

Syracuse: Things could get worse before they get better for the Orange with road games coming up against Georgia Tech and former Big East rival Georgetown. An NCAA Tournament bid may be nothing more than a pipe dream when January rolls around. The Orange offense remains a huge problem and they get next to nothing inside.

“Obviously, it doesn’t get easier for them in terms of schedule, but I think you have a core nucleus of guys that can win at this level, and he’ll get them to do that,” McCaffery said of Boeheim.

Iowa: It’s a quick turnaround for the Hawkeyes, who have a tough road matchup Friday against No. 4 Michigan.