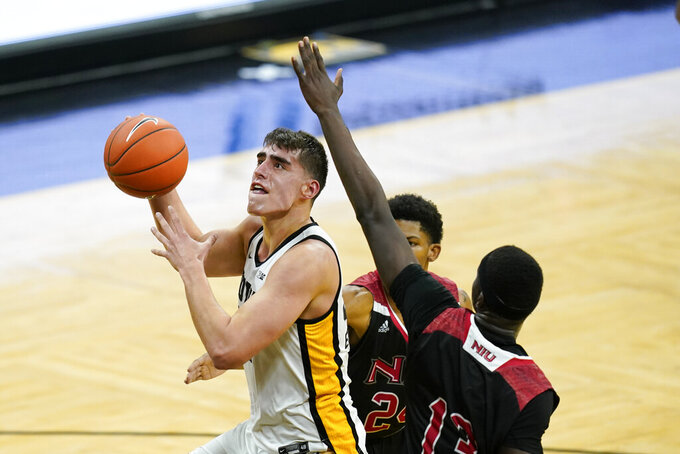 IOWA CITY, Iowa (AP) — Joe Wieskamp and the rest of the starters for No. 3 Iowa got to take a second-half break Sunday.

Garza and Wieskamp left at the 15:22 mark of the second half and didn’t return as coach Fran McCaffery used his reserves for most of the half. Eleven Hawkeyes played 10 or more minutes.

“You did your job when you’re sitting on the bench for 16 minutes in the second half,” Wieskamp said.

The Hawkeyes (6-0) played their third game in six days. After playing No. 16 North Carolina and Iowa State last week, and a game against top-ranked Gonzaga coming up Saturday, a little time off to be a spectator was just fine for Wieskamp.

“It was exciting to see those guys get a chance to play,” Wieskamp said.

“It’s incredibly valuable,” McCaffery said of getting to use his reserves more. “They have to get out there and execute our stuff, and understand how to play with each other. They have to experience some success, have the ability to make a mistake and play through it. And that’s how you grow.”

Iowa had a 25-2 first-half run that included a stretch of 15 consecutive points. The Hawkeyes led 51-27 at halftime and were up 71-32 when McCaffery started sitting his starters.

“We jumped them early, kind of ended the game right away,” Wieskamp said.

Murray had eight of his points near the end of the Hawkeyes’ first-half run. Murray has contributed off the bench all season, averaging 6.5 points in 15 minutes per game.

“We have a lot of great players on our team, a lot of players that can score really well,” Murray said. “And that’s something I’m not right now. If I can do the little things on the court, then Fran will build more trust in me.”

“He’s just going to keep getting better,” Fran McCaffery said. “He’s done it every game so far this year. He’s done it every day in practice. He’s a prime example of recruiting is not an exact science. Some guys get on a list, some guys produce. And that kid produces every time you put him on the floor, I don’t care who he plays against.”

Garza, who came into the game leading the nation in scoring at 30.4 points per game, added eight rebounds. Garza, the lone unanimous selection to The Associated Press preseason All-America team, was 8 of 10 from the field and is shooting 69.1% for the season.

Adong Makuoi had 14 points and Anthony Crump had 10 for Northern Illinois (0-5).

Iowa, ranked second in the country in scoring at 99.4 points per game, had its third game of 100 or more points. The Hawkeyes have scored 50 or more points in five consecutive halves.

They get this week to prepare for Gonzaga.

“I’ve been looking forward to them since we heard we were playing them,” Wieskamp said. “I think our whole team has. Like you said, we’ve been focused on one game at a time. But now that game is here.”

It was Fran McCaffery’s 200th win in 11 seasons at Iowa. McCaffery, who got his 450th career win on Friday against Iowa State, is 200-143 with the Hawkeyes. “It makes you reflect on the great (players) you’ve had, the ones that fought for you,” McCaffery said.

The Hawkeyes maintained their momentum after wins last week over No. 16 North Carolina and in-state rival Iowa State.

Northern Illinois, coming off an overtime loss to Ball State, led for most of the first six minutes.