Gates gets contract extension at Cleveland State thru 2027 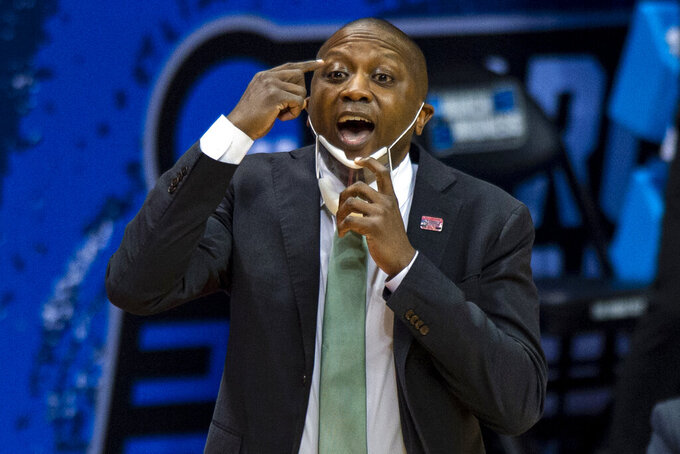 FILE - In this March 19, 2021, file photo, Cleveland State head coach Dennis Gates directs his team during the first half of a first-round game against Houston in the NCAA college basketball tournament at Assembly Hall in Bloomington, Ind. After turning around a program in just two seasons, Gates signed a contract extension Thursday, May 20, 2021, through the 2026-27 season. (AP Photo/Doug McSchooler, File)

After turning around a troubled program in just two seasons, Gates signed a contract extension Thursday through the 2026-27 season. The deal includes bonus incentives based on the team's performance on the court and in the classroom.

Gates led the Vikings to the NCAA Tournament in his second season and he has been named Horizon League Coach of the Year in both seasons at CSU.

When he signed a five-year contract in 2019, Cleveland State was coming off a 10-21 season, players were transferring and the Vikings had lost at least 21 games in each of the four previous seasons.

But the 41-year-old Gates has quickly changed the culture and created excitement around a program that has struggled for most of the past two decades.

Given his success, bigger schools were beginning to show interest in Gates and Cleveland State wanted to make sure he had everything he needed. The school revised some of his original deal while extending it for three more seasons.

“Cleveland State men’s basketball has a very rich tradition and history, and I’m humbled to lead this program,” Gates said. “I’m excited for the opportunity to continue to grow upon the success our program has experienced the last two seasons, while building champions in the classroom, on the court and in our community.”

Gates came to Cleveland State after spending nine seasons on Leonard Hamilton's staff at Florida State. He also has been an assistant at Nevada, North Illinois, Cal and Marquette.

The school will also make a financial investment into the assistant coaching salary pool, work to improve its home schedule and make upgrades in strength and conditioning, recruiting, travel and equipment.

Cleveland State went 19-8 last season, winning 16 games in the Horizon League and making the NCAA field for just the third time and first time 2009. The Vikings were beaten by 31 points by Houston, which went on to make the Final Four.

Cleveland State went 19-8 last season, winning 16 games in the Horizon League and making the NCAA fied for the first time since 2009.