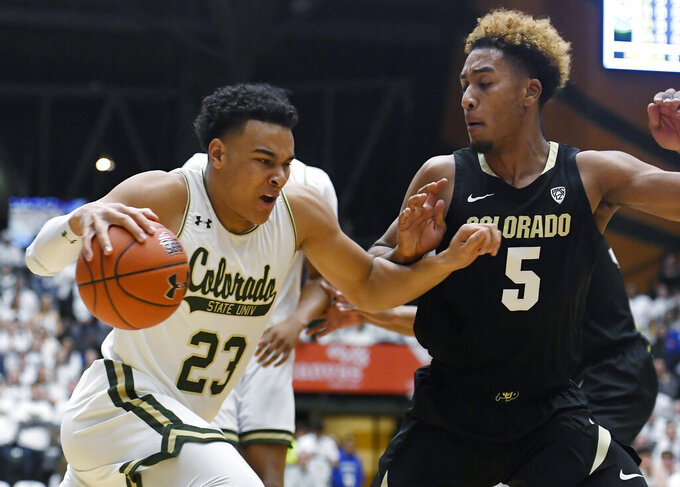 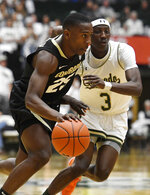 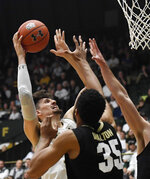 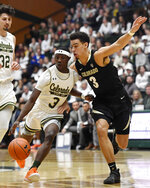 Gatling scored a season-high 20 points to help No. 24 Colorado hold off Colorado State 56-48 on Friday night after squandering a 16-point lead.

He couldn't have picked a better time to break out of his funk as standout player McKinley Wright IV struggled with his shot.

“To have somebody step up that's in a slump all year and who hasn't played his best all year and hasn't made shots all year, to come up and make big-time shots like that is huge for us,” said Wright, who had eight rebounds and three assists on a night when he was 1 for 11 from the floor. “That just shows how many weapons we have. Every night is not going to be my night. Every night is not going to be Tyler's night. I'm proud of him man.”

All that extra time in the gym did wonders for Gatling.

“I've been waiting for this day to come,” he said.

Leading 33-17 with 16:41 remaining, the Buffaloes (8-2) couldn't close out a cold-shooting Rams team that suddenly found their touch. Colorado State tied the game at 39 with 7:18 left.

Moments later, Gatling had a bucket to put the Buffaloes ahead for good.

Gatling also was originally credited with blocking a shot on Nico Carvacho down the stretch. That caught even him by surprise.

The officials changed it to Tyler Bey.

Bottom line: Someone got a piece of it.

The Rams (7-6) rebounded from a sluggish start in which they shot 17.9% during the first half and scored just 12 points.

Then again, the Buffaloes knew they would respond.

“We didn't expect to see that big (of run)," Wright said. "We just had to hang our hats on defense."

Colorado did, too. The Rams were 2 of 22 from 3-point range in a contest in which they never led.

“There's some eye-popping numbers that come off the (stat sheet) that say we probably didn't deserve to win that,” Colorado coach Tad Boyle said. “The reality is we did because we defended at a very, very high level."

That blown lead, though, didn't exactly sit well with Boyle.

Wright didn't have his best night for the Buffaloes, who will more than likely fall out of the rankings after a loss to Northern Iowa earlier in the week. But the bench stepped up behind Gatling and Lucas Siewert (12 points).

Carvacho finished with nine points and 10 rebounds for the Rams.

“We were there at the end,” Rams coach Niko Medved said. “We couldn't get over the hump.”

The opening half was anything but pretty for Colorado State, which missed all 10 attempts from 3-point land. Although the Buffaloes led 27-12 at the break, it could've been more if not for their 12 turnovers.

The message at the half for the Rams was simple.

“We were told to keep working,” said Isaiah Stevens, who finished with 10 points. “Just keep looking for shots. We started feeling it.”

Colorado: A win's a win, right? No style points, correct? The Buffaloes weren't at their offensive best, but the defense picked up the slack. Colorado leads the all-time series 91-38.

Wright didn't let his off night from the floor bother him in the least. He made up for it in other ways, like on the boards.

"Most players in my position would be mad and frustrated and having their head down because they didn't play well,” Wright said. “The player I am, everybody expects me to play well. It doesn't happen all the time.”

"Just wanted to say hello and say how excited I am to be at Fort Collins and CSU," Addazio told the fans.

Fired from Boston College on Dec. 1, Addazio signed a five-year deal with the Rams earlier this week. His first game will be at home against Colorado.