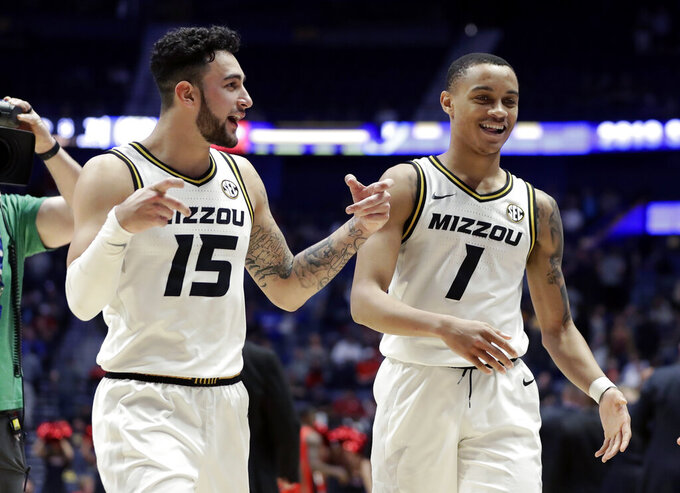 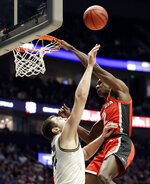 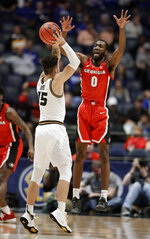 Geist scored a career-high 30 points and No. 12 seed Missouri outlasted No. 13 seed Georgia 71-61 on Wednesday in the opening round of the Southeastern Conference Tournament.

"I just tried to go out there and play my game," the senior guard said. "When it all comes down to it, if I give my all, I don't have anything to regret."

After losing four straight games last month, Missouri has bounced back to win three of its last four.

"Sometimes in losing, though it's painful, it forces you to grow," Missouri coach Cuonzo Martin said.

Missouri gained a measure of revenge after losing 62-60 to Georgia in last year's SEC Tournament.

Georgia (11-21) finished the first season of Tom Crean's coaching tenure with 12 losses in its last 13 games. The Bulldogs wasted a career-high 26 points from Jordan Harris.

The two teams were meeting exactly one week after Missouri won 64-39 at Georgia, holding the Bulldogs to their lowest point total at home since a 36-30 victory over Georgia Tech during the 1945-46 season.

"Playing this team a week ago and knowing we did not leave it all out there on the floor against them, I am firmly convinced they did tonight," Crean said.

Missouri took the lead for good at 45-43 on a Kevin Puryear basket with 12:05 left. Neither team led by more than seven points until the final four minutes of the game.

While Georgia did a great job of drawing fouls, the Bulldogs failed to take full advantage. Georgia shot just 21 of 36 on free-throw attempts, including 9 of 18 in the second half.

"It spreads throughout a team," Georgia forward Derek Ogbeide said. "Once two or three guys, a couple of guys miss, the next thing you know, it spreads, much like anything. Simply missing a shot from a few people a few times, that becomes contagious."

Geist shot 9 of 15 overall and 10 of 13 from the foul line to lead Missouri. His previous career high was a 28-point performance against Green Bay on Dec. 9, 2017. Xavier Pinson added 15 points.

Ogbeide had 12 and Nicolas Claxton added 11 for Georgia. Claxton also had six blocks.

Georgia: The Bulldogs have a long way to go as Crean attempts to rebuild the program. Before this year, Georgia hadn't lost as many as 21 games in a season since a 3-21 finish in 1955-56.

Missouri: The Tigers won without getting much from Jeremiah Tilmon, their top post player. Tilmon scored four points and shot just 1 of 7 while playing 20 minutes and battling foul trouble. Tilmon has picked up at least four fouls in seven of his last eight games and has fouled out of three of them.

Missouri's Javon Pickett returned to the starting lineup after back spasms caused him to miss a 73-68 loss to Mississippi on Saturday. He went scoreless in 22 minutes.

Something about this matchup causes poor outside shooting.

Georgia was 4 of 19 and Missouri went 3 of 11 from 3-point range Wednesday. When these two teams met last week, the two teams shot a combined 0 for 22 from beyond the arc in the first half before Missouri ended up 6 of 21 and Georgia finished 3 of 20.

Georgia will replace three departing senior starters in Claxton, Turtle Jackson and Ogbeide next season. The Bulldogs add incoming freshman Anthony Edwards, rated as the nation's No. 2 overall prospect in his class according to composite rankings of recruiting sites compiled by 247Sports.