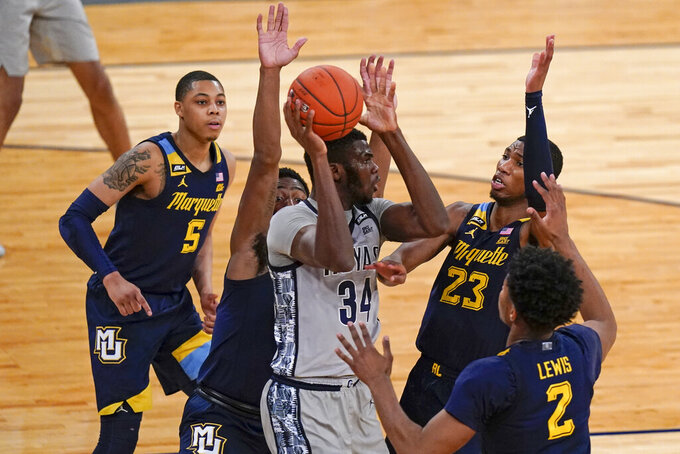 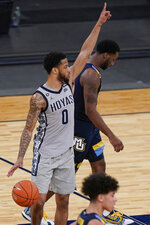 NEW YORK (AP) — Qudus Wahab had 19 points and seven rebounds and Georgetown limited Marquette to 14 first-half points in posting a 68-49 victory in the opening game of the Big East Conference tournament at Madison Square Garden on Wednesday.

Jahvon Blair came off the bench and added a game-high 20 points for the eighth-seeded Hoyas (10-12), who are 7-4 since returning to action following a pause for COVID-19 issues.

D.J. Carton had 17 points to lead Marquette (13-14), which made six field goals in the first half, including 2 of 13 from long range. Freshman forward Dawson Garcia, who was averaging 13.2 points, got in early foul trouble and finished with nine points, all in the second half. It's Marquette's first losing season since a 13-19 finish in 2014-15.

Georgetown will face three-time defending and top-seeded Villanova in the first quarterfinal on Thursday. The Wildcats beat Georgetown twice in the regular season but they are banged up.

Collin Gillespie, one of three players to share the conference player of the year award on Wednesday, will miss the rest of the season with a knee injury and fellow guard Justin Moore's status is uncertain with an ankle injury.

Georgetown took control early, especially inside with Wahab and fellow big man Timothy Ighoefe clogging the middle to prevent Marquette from going inside. The Hoyas opened a 10-point lead early and used a 10-0 run over the final 6:07 to take a 32-14 lead.

Marquette had rallied from an 18-point second-half deficit to beat Georgetown in their only other meeting this season, but there was no comeback on Wednesday in a game played in front of a limited number of fans.

The win in the tournament was the first for Georgetown since 2016.