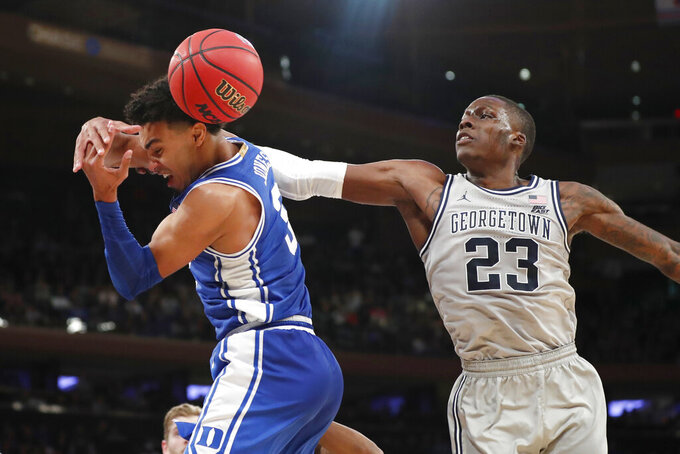 WASHINGTON (AP) — A Georgetown men’s basketball player who is now off the team was among three Hoyas who were the subject of complaints accusing them of burglary and harassment.

A university statement Monday said Josh LeBlanc was off the roster “effective immediately.” LeBlanc and two other players — Myron Gardner and Galen Alexander — had restraining orders filed against them amid allegations they harassed a female student and stole several items from her home.

No criminal charges have been filed.

The university also announced Monday that starting point guard James Akinjo was off the team, but a subsequent statement specified that Akinjo was not involved in the allegations involving the other players. It did not say why he was removed. Reed also said Akinjo was seeking a transfer.

Gardner and Alexander were still listed on the Hoyas’ roster Tuesday night on Georgetown’s website, while LeBlanc and Akinjo have been removed.

The university issued a statement Monday saying: “Georgetown takes student conduct issues very seriously and ensures that they are investigated thoroughly. While we are not able to comment on specific cases, we have processes for investigating and adjudicating alleged violations of our student code that are fair to both parties.”

Washington D.C. Superior Court records show a restraining order was requested in November against LeBlanc, Gardner and Alexander. The hearing was pushed back to Dec. 9. According to the documents, a female Georgetown student accused the trio of “threats against my personal safety.” Temporary restraining orders filed by a different student against LeBlanc and Alexander were granted days later.

The court documents refer to a pair of police incident reports from November. The two incident reports don’t mention LeBlanc or the other players by name but detail two September incidents centering on the same property in northwest Washington.

On Sept. 16, according to the incident report, three men entered the property and took several items, including a camera, camera lens and two PlayStation controllers. When subsequently contacted by video call, the suspect allegedly said to the victim, “If you tell anyone, we’ll send people after you.”

LeBlanc was averaging 7.2 points and 2.7 rebounds this season. He appeared in only six games because he was suspended for the team’s opener. As a freshman, LeBlanc started the last 22 games and averaged 9.1 points and 7.3 rebounds, earning a spot on the Big East all-freshman team.

Georgetown opened this season 4-1, including an 82-66 victory over then-No. 22 Texas at Madison Square Garden. But Coach Patrick Ewing’s team then lost 81-73 to then-No. 1 Duke in New York and 65-61 at home against UNC Greensboro last Saturday. The Hoyas’ next game is Wednesday night at Oklahoma State.

Georgetown won the 1984 national championship with Ewing at center. The team last reached the Final Four in 2007.