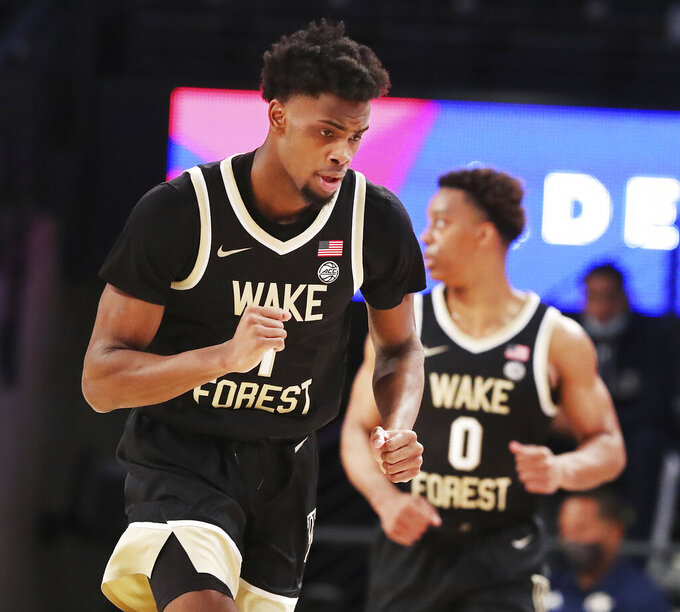 Wake Forest guard Kyle Sturdivant reacts to hitting a three against Georgia Tech during the first half of an NCAA college basketball game on Sunday, Jan. 3, 2021, in Atlanta. (Curtis Compton/Atlanta Journal-Constitution via AP) 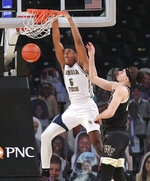 ATLANTA (AP) — After a dismal start to the season, Georgia Tech turned things around and rolled into the new year with a modest winning streak.

The Yellow Jackets were forced to shut down all basketball activities and postpone four straight games.

A 2 1/2-week layoff has put coach Josh Pastner in uncharted territory as his team prepares to resume play Wednesday night by hosting No. 20 Clemson.

“This is my first time in the middle of a season being on pause like this," he said. “I want to play games. Give me 50 games. I love practice, but you want to play, you want to compete.”

Having set a clear goal of Georgia Tech returning to the NCAA Tournament for the first time in more than a decade, Pastner's team started the season with disheartening losses to state rivals Georgia State and Mercer.

But, after another loss at Florida State in their Atlantic Coast Conference opener, Georgia Tech (6-3, 2-1) ripped off four straight wins — including conference victories over North Carolina and Wake Forest.

The Yellow Jackets haven't played since their 70-54 rout of the Demon Deacons on Jan. 3.

Pastner didn't sound quite as confident that the Yellow Jackets can just pick up where they left off.

“How will we be? I don’t know. We’ve not played in a long time,” Pastner said. “We had some really great momentum prior to getting shut down. It is what it is. We’ve just got to get ready to go.”

Even with the long layoff, Pastner indicated that his team will not be at full strength against Clemson because of COVID-19. He declined to provide details.

Pastner is even more concerned about his players' state of mind.

“We're not dealing with robots,” he said. “We're dealing with human beings. Momentum and continuity matter in sports. In the end, we've got to go out and try to get it done. We're playing a really good team that we need to play really well against.”

But Pastner said he's changed his philosophy for dealing with the pandemic since the start of the season.

The Yellow Jackets tried to get by initially with non-contact practices, as Pastner figured that would minimize the fallout should one of his players test positive.

But the losses to Georgia State and Mercer forced him to change his tactics.

“If we had continued that, we could've been 0-27 on the year,” Pastner said. “We may not have won a game if we had continued non-contact practices. I realized we've got to practice with contact, in as normal an environment as we can, to give our team the best chance of success.”

Despite the long layoff, Pastner has no regrets about his decision.

“We decided to take a calculated risk,” he said. “If you have a positive, the whole team has to shut down again. ... But you've got to practice to have any chance of success.”