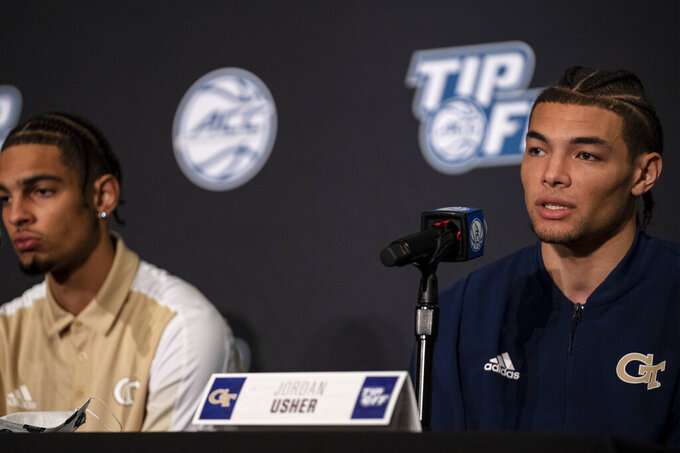 Coming off their first ACC Tournament title since 1993, and first appearance in the NCAA Tournament in 11 years, the Yellow Jackets are projected to slip back after losing two key players, Moses Wright and Jose Alvarado.

Georgia Tech didn’t even get a mention in The Associated Press preseason poll. An ACC media panel picked the Yellow Jackets to finish 10th -- only the second time since the league expanded in 2005 that a reigning champion was picked to finish that low the following season.

The championship won’t mean nearly as much if the Yellow Jackets quickly crumble back to mediocrity.

“We’re not defending anything. We were the 2021 ACC champions, and now we’re moving into next season,” Pastner said. “We’ve got to do a great job of turning the page and knowing that that was last year and this is a new year.”

Michael Devoe passed on a chance to enter the NBA draft, electing to return for another season after averaging 15 points a game.

The 6-foot-5 guard will be joined by super senior Jordan Usher, who elected to play a fifth season after the pandemic-marred 2020-21 campaign.

Usher averaged 11.6 points. The Yellow Jackets counting on even bigger things this season.

“He's going to be the best cutter this year in the country,” Devoe predicted. “He’s going to have a really good year this year, and I’m looking forward to seeing it.”

Wright and Alvarado were a huge part of the Yellow Jackets' success, two players who arrived on campus as lightly regarded recruits but developed into ACC standouts.

Wright was the conference's player of the year, leading the team in scoring (17.4 points) and rebounding (8.0).

Alvarado was Georgia Tech's gritty leader at point guard. He averaged 15.2 points and a team-high 4.1 assists.

Both decided not to return to college for an extra year.

After being passed over in the NBA draft, Alvarado earned a two-way contract from the New Orleans Pelicans, while Wright was cut during the preseason by the Los Angeles Clippers.

Usher said the Yellow Jackets are eager to carry on what Wright and Alvarado started.

“They text us all the time saying, kind of a joke, like, ‘Hey, let us still be able to wear our GT gear,'" Usher said. "It's our turn to keep the torch burning, and I take that with a lot of pride. I’m not going to let them down.”

Georgia Tech got off to a terrible start last season, losing its first two games at home to in-state schools Georgia State and Mercer.

“We felt like the world was ending,” Devoe said.

Pastner is focused on avoiding a repeat this season. The Yellow Jackets open Nov. 9 at home against Miami of Ohio and follow with two more games at McCamish Pavilion against Stetson and Lamar.

Georgia Tech has often struggled in November and December, losing to teams such as Grambling, Wofford and Gardner-Webb during Pastner’s first five seasons.

“Just keeping that same stride that we seem to have found the past two seasons like around January or maybe late December, where our team really starts to click, and just put that at the beginning of our season,” Usher said. “Coach has preached that to us all summer — no slow starts.”

Georgia Tech struggled to fill 8,600-seat McCamish Pavilion even before playing last season before only a handful of fans because of the pandemic.

The school will allow full capacity this season — a change that Pastner hopes will create an imposing home-court advantage.

“It’s going to be nice having people back," he said, “if people choose to come.”

Pastner hasn't had a lot of success recruiting top prospects to Georgia Tech, so he's focused on player development and keeping guys around for the long haul.