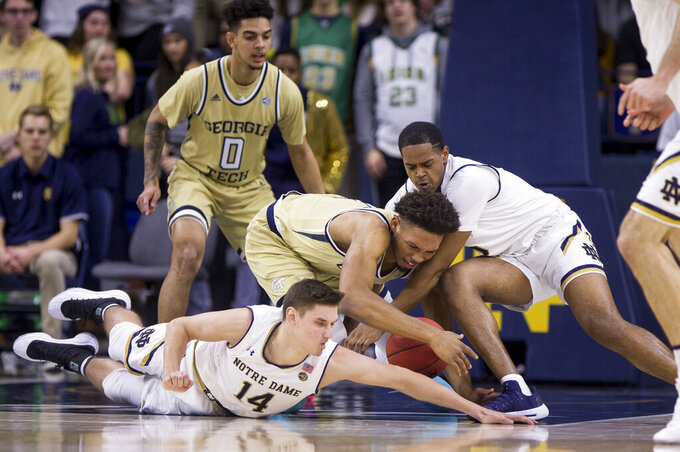 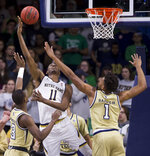 SOUTH BEND, Ind. (AP) — Notre Dame coach Mike Brey turned out to be quite prophetic as his Irish and visiting Georgia Tech struggled to find the bottom of the net in the first half of their Atlantic Coast Conference game Sunday night.

"I told our guys, 'We're going to win the ugliest college basketball game in history, but it's going to be a league win. Let's keep playing," Brey said.

His Irish did, overcoming a 32.8-percent shooting night thanks to T.J. Gibbs' 20 points, 18 from D.J. Harvey and John Mooney's 15th double-double of the season in a 69-59 victory over Georgia Tech.

"It was fun in the second half," Gibbs said after scoring 18 points in the final 20 minutes. "This was a game where we really competed. It was a win that was much needed and we're going to try to take off with it."

Coming off a 62-47 loss at Miami last Wednesday, the Irish (13-11, 3-8 ACC) won for only the second time in their last seven behind Gibbs and Harvey, who each hit 5-of-13 shots from the field but contributed elsewhere. Gibbs had five assists and four steals, while Harvey pulled down eight rebounds, five on the offensive boards.

Mooney, whose streak of eight consecutive games with a double-doubles was snapped at Miami, finished with 11 points and 14 rebounds. Prentiss Hubb added 13 points for Notre Dame, had five rebounds and three assists.

"I think we learned from that (the loss at Miami) so tonight we kept our foot on the gas the whole game," Harvey said. "As a team, we didn't have the ball stick like we did down at Georgia Tech. We kept it moving and it helped."

"We're just not able to put the ball in the basket right now," Georgia Tech coach Josh Pastner said. "We had some great looks."

The first half was one of scoring droughts — one by the Irish of 7:49 between two by the Yellow Jackets of 3:32 and 4:28 — and fittingly ended with Notre Dame's Nate Laszewski blocking Devoe's runner at the buzzer that left Georgia Tech with a 25-24 halftime lead.

Georgia Tech built a 17-8 lead — its largest of the game — on Devoe's third 3-pointer about seven minutes in before Laszewski ended a 0-for-10 start from beyond the arc. It ignited an Irish 16-7 run that ended with Mooney converting a 3-point play with 49 seconds left before halftime.

Then with the score tied 33-33 at 14:53, the shot clock had issues, which considering the shooting by both teams was only fitting.

The Irish regained the lead on Gibbs' 3-pointer with 13:53 remaining to end a drought of nearly three minutes, and they built it back up as Gibbs made five of six free throws after being fouled twice on 3-point attempts. Mooney's layup with 4:12 to go gave the Irish a 54-44 lead and they cruised from there.

Georgia Tech: The Yellow Jackets entered the game No. 3 in the ACC in scoring defense (66.9 points per game), No. 3 in field-goal percentage defense (40.4) and No. 2 in 3-point shooting defense (28.8). Notre Dame finished with 69 points but shot 32.8 percent from the field and 22.2 percent from beyond the arc. The Irish forced 14 turnovers and grabbed 20 offensive rebounds for a 20-7 advantage in second-chance points.

"They hurt us with those offensive rebounds and the turnovers," Pastner said after Notre Dame outscored Georgia Tech 29-12 off turnovers and on second-chance shots.

Notre Dame: Gibbs, who was expected to carry some of the scoring load after averaging 15.3 points per game last season, entered the game averaging 13.1 points on 34.4 percent shooting. After scoring just two points on 1-of-6 shooting in the first half, he stepped it up in the second half to finish with 20 points on 5-of-13 shooting (38.4 percent) from the field and 8-of-9 shooting at the free-throw line. He also had five of Notre Dame's 12 assists and four of its eight steals.

"You just have to keep fighting and battling," Gibbs said. "At the end of the day, it's about us in this locker room, no matter who's talking. It can be anybody from administrators, to news guys, to people on Twitter. That doesn't affect us. No matter what, we're going to have everyone's back."