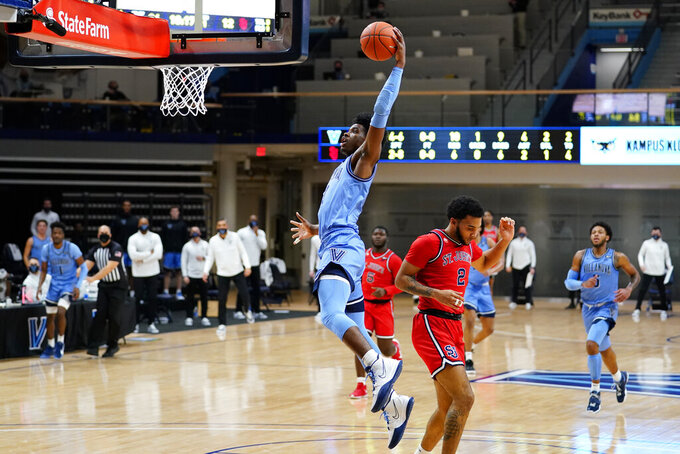 Villanova's Brandon Slater, left, goes up for a dunk past St. John's Julian Champagnie during the first half of an NCAA college basketball game, Tuesday, Feb. 23, 2021, in Villanova, Pa. (AP Photo/Matt Slocum)

VILLANOVA, Pa. (AP) — Caleb Daniels scored 17 points, and Collin Gillespie and Jermaine Samuels each had 14 to lead No. 8 Villanova to an 81-58 win over St. John’s on Tuesday night.

As Villanova jammed home dunk after dunk, sank 3 after 3, it was hard to remember how it was so soundly shut down in a Feb. 3 loss to the Red Storm in New York. That win was the biggest yet under second-year coach Mike Anderson — the Johnnies doused him with water in a wild celebration — yet the Red Storm (14-9, 8-9 Big East) did little to build off the upset. St. John’s has lost three of four games and is looking at having to run the table in the Big East Tournament to make the NCAA Tournament.

The 2016 and 2018 national champions under coach Jay Wright, the Wildcats not only came out motivated to make St. John’s pay, they seemed poised to put the sport on notice they can again be a force in the tourney.

Daniels, Jeremiah-Robinson Earl (12 points) and Gillespie all hit early 3-pointers for a 20-9 lead and the Wildcats smothered the Red Storm on defense. The best way to avoid an upset is never let an underdog think it has a chance. Brandon Slater had consecutive dunks off turnovers that stretched the lead to 16.

Gillespie missed 10 of 12 shots and only scored four points in the first game against St. John’s. He hit two of Villanova’s 11 3-pointers. Daniels sank four.

The Wildcats got a 5-minute boost from Bryan Antoine — he picked off a pass and heaved it as he fell out of bounds to Slater for one of the dunks — as the oft-injured guard is worked into the rotation. Antoine, a McDonald’s All-American, played in just two games this season as he recovered from a right shoulder injury. He underwent surgery on the shoulder in June 2019 and hurt it this season in October. Wright gave him meaningful minutes in the first half, perhaps a sign the 6-foot-5 reserve can become one more key rotation piece in the postseason.

Villanova missed five straight shots late in the first half until Daniels hit a 3 and sent the Wildcats into halftime with a 42-25 lead.

Big East scoring leader Julian Champagnie (19.8 points per game) was invisible in the first half for St. John’s. He missed his first eight shots and finished the game with 16 points. Champagnie had 14 points and a career-high 13 rebounds when the Red Storm knocked off Villanova just 20 days earlier for their sixth win in seven games.

St. John’s: Perhaps the Red Storm, an 11 1/2-point underdog, could have hung on for potential at-large NCAA consideration with a sweep of the Wildcats. ... Freshman guard Posh Alexander appeared to injure his right thumb/wrist in the second half.

Villanova: More of the same. The Wildcats haven’t been swept by a Big East team since 2017.