Gillespie leads No. 15 Villanova past Temple 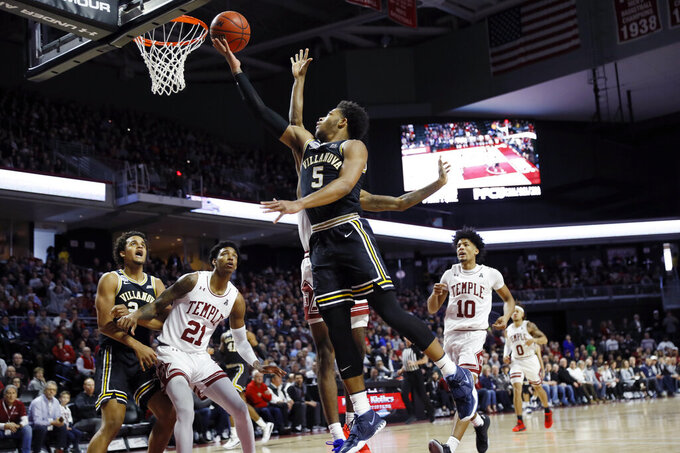 Villanova's Justin Moore (5) goes up to shoot against Temple's Quinton Rose during the first half of an NCAA college basketball game, Sunday, Feb. 16, 2020, in Philadelphia. (AP Photo/Matt Slocum)

Gillespie scored a season-high 29 points to lead No. 15 Villanova to a 76-56 comeback victory over Philadelphia rival Temple on Sunday.

Jermaine Samuels added 13 points and Jeremiah Robinson-Earl had 10 for Villanova (19-6), which won its seventh straight game over Temple while finishing 4-0 in the Big 5.

The Wildcats, hurt by early foul trouble to starters Justin Moore and Robinson-Earl, trailed by four points at halftime. But they took over after the break, using a game-changing 20-2 run over the first 5 minutes, 46 seconds of the second half to take control.

“We were good, we were positive, we knew we had to make adjustments and stick to our game plan,” Gillespie said of the feeling at the break. “In the second half we made stops at the defensive end, and it gave us easy opportunities at offensive end.”

Villanova made 7 of 10 shots, including 6 of 8 3-pointers, during the stretch while Temple was 1 of 8 from the field, 0 for 3 from beyond the arc and committed five turnovers.

“Great second half,” Villanova coach Jay Wright said. “We just made shots. When that happens, any team is tough to beat. It started with our defensive effort in second half and that led to making shots. That together was the difference.”

Temple was in good position to pull off the upset after the opening 20 minutes.

But Villanova quickly erased a four-point halftime deficit by hitting three 3-pointers early in the second half, the last by Gillespie with 17:41 remaining put Villanova up 35-30.

And the Wildcats continued to pour it on.

Temple got within seven at 49-42 on Rose’s drive with 10 minutes left, but never got closer.

Outside shooting was a big difference, as Villanova made 17 of 36 on 3-pointers while Temple was 2 of 16 from beyond the arc.

Gillespie had a career-high seven 3-pointers.

“He trumped us this afternoon,” McKie said.

Temple and Villanova have been the standard bearers of the Philadelphia Big 5, the yearly city round-robin series that also includes La Salle, Penn and Saint Joseph’s. The Wildcats already had clinched at least a share of their 27th title with wins earlier this season over the other three Philadelphia rivals. They are now tied with Temple for most Big 5 titles.

Villanova: The Wildcats are third in the tough Big East with six conference games remaining. Villanova has a chance to finish strong in the league, as five of its six remaining Big East games are against teams that are the bottom five teams in the league. Villanova’s other conference game is a rematch at first-place Seton Hall on March 4. The Pirates defeated Villanova 70-64 on Feb. 8 at the Wells Fargo Center.

Temple: The Owls’ best hope to make the NCAA tournament is to win the American Athletic Conference tournament and Temple could help itself with a better seeding. The top four league teams get a first-round bye in the conference tournament. Temple is 5-7 in the AAC and three games back of fourth-place SMU with six games remaining. If the Owls can’t grab the No. 4 seed or higher, they’ll have to win four games in four days in the AAC tournament to grab the conference’s automatic bid.

Villanova: At DePaul on Wednesday.