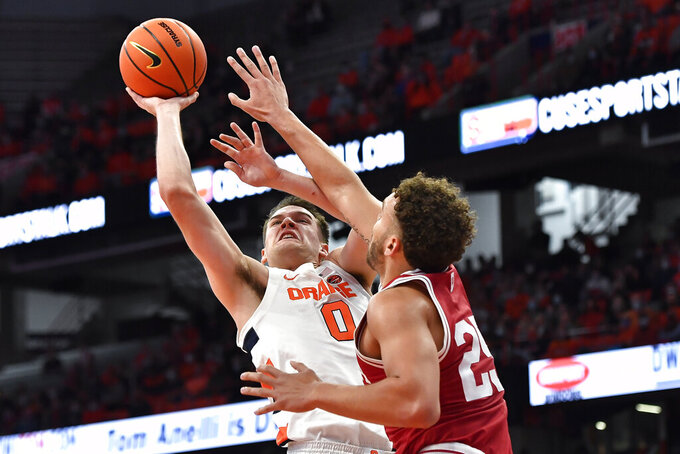 In the second overtime, Indiana forward Miller Kopp was fouled on a deep 3-point attempt with 7.6 seconds to go, and made all three free throws to tie it at 110. Girard took the inbounds pass and got it to Jimmy Boeheim for a give-and-go before driving the lane to force a foul, leading to the go-ahead free throws.

Indiana (6-1), which had 25 turnovers and overcame an 18-point, second-half deficit, didn't get off a shot at the final buzzer.

Buddy Boeheim scored 27 points and Jimmy Boeheim added a career-high 26 to lead Syracuse. Girard finished with 22 points. They combined for 12 of the Orange's 13 3-pointers.

“This is what we work for every day as a team. We’re capable of doing a lot of good things,” Buddy said. “Everyone can help us. Just a great effort from everyone. We’re not going to quit.”

Syracuse essentially had the game won in regulation when they fouled Khristian Lander with a three-point lead and 2.6 seconds remaining. Lander made the first free throw and intentionally missed the second, but Benny Williams fouled Trayce Jackson-Davis on the putback. Jackson-Davis made both free throws to force the first overtime tied at 88.

Jackson-Davis, who scored a career-high 43 points against Marshall, led the Hoosiers with 31 points and 16 rebounds. Kopp added a career-best 28 points. Race Thompson had 17 points, 12 rebounds and eight assists. Parker Stewart chipped in 20 points before fouling out.

Jesse Edwards added 17 points and Cole Swider 14 for Syracuse, which has won six of last seven against the Hoosiers.