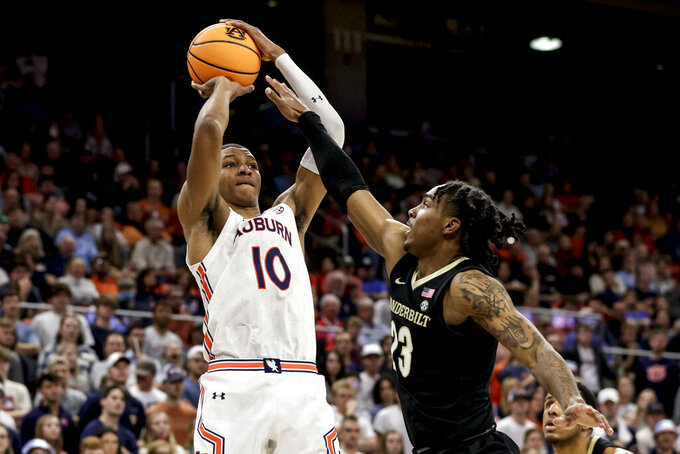 Auburn forward Jabari Smith (10) shoots a 3-pointer over Vanderbilt guard Jamaine Mann (23) during the second half of an NCAA college basketball game Wednesday, Feb. 16, 2022, in Auburn, Ala. (AP Photo/Butch Dill)

The committee that will select the NCAA Tournament sees little gap between Gonzaga and Auburn as the top team.

For now, the Zags are the pick.

Gonzaga was the top overall seed in initial rankings released Saturday by the NCAA Division I Men’s Basketball Committee, sitting ahead of Auburn, Arizona and Kansas as the other teams holding No. 1 regional seeds.

Gonzaga, which held the No. 1 seed in last year's early reveal, and Auburn have held the No. 1 ranking in The Associated Press men's college basketball poll for the past five weeks, with the Mark Few's Bulldogs (22-2) currently in their third stint at the top.

“I would tell you Gonzaga and Auburn, in the committee room: very close, razor thin I would even offer in the discussion - an extended discussion between these two teams,” selection committee chairman Tom Burnett said.

Burnett said there was also a slim margin between the the Tigers and the Wildcats as the third No. 1 seed, while Burnett said there was “maybe a little bit more separation” between Arizona and Kansas as the last of the top regional seeds. The seeds were unveiled before Auburn's upset loss at Florida on Saturday afternoon.

Saturday’s nationally televised reveal of the top 16 overall seeds offers a snapshot of where things stand with three weeks remaining until the 68-team field is revealed on Selection Sunday.

Reigning national champion Baylor was the No. 5 overall seed, followed by Kentucky, Purdue and Duke as the regional 2-seeds.

Burnett said Alabama, Houston and Ohio State were the top teams discussed for inclusion in the top 16.

That was particularly notable with Kelvin Sampson's Cougars — who recached the program's first Final Four since 1984 last season — sitting at No. 4 in the NET (NCAA Evaluation Tool) rankings ahead of Auburn (No. 8) and Kansas (No. 7). By comparison, Providence is 29th in the NET.

“The NET's been a great sorting tool for the committee, but it's not the be-all, end-all for us,” said Burnett, commissioner of the Southland Conference.

“For me as a committee member, for others independently thinking, I look at the NET as really kind of a first step. I want to see why that NET is that way. ... Houston certainly has an issue with the lack of Quad 1 wins this year. Whereas Providence has a lot of Quad 1 opportunities in the Big East Conference, and they’ve taken advantage of that.”

While last year's tournament was played entirely in Indiana due to the COVID-19 pandemic, this year marks a return to sites around the country and brackets bearing their traditional geographic names.

Gonzaga headlined the West Region, which will go through San Francisco. Duke — which handed Gonzaga one of its two losses — was next, followed by Illinois and Texas.

Arizona was the top seed in the South Region, which will go through San Antonio, ahead of Baylor, Tennessee and Providence. And in the East, Kansas was followed by Kentucky, Villanova and Wisconsin — a grouping that would give Villanova a local edge with Sweet 16 and Elite Eight games there being played in Philadelphia.

Selection Sunday is March 13. The Final Four will be held in New Orleans, with the semifinals set for April 2 and the championship game two days later.