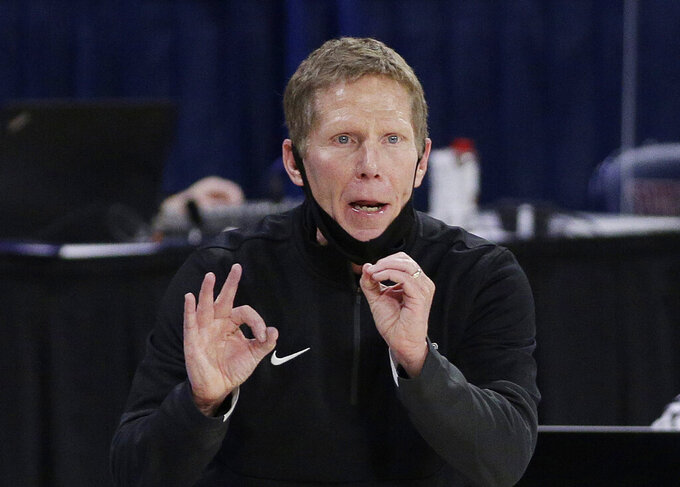 FILE - In this Feb. 25, 2021, file photo, Gonzaga coach Mark Few signals to players during the second half of an NCAA college basketball game against Santa Clara in Spokane, Wash. Few has been cited for driving under the influence. The Coeur d’Alene Press and Spokesman-Review acquired a police report through a public information request that says Few was stopped Monday evening, Sept. 6, after he was “called in as driving erratic and speeding.” (AP Photo/Young Kwak, File)

COEUR d'ALENE, Idaho (AP) — Gonzaga basketball coach Mark Few has been cited for driving under the influence and said he exhibited “poor judgement” operating a motor vehicle after consuming alcohol.

Few released a statement Tuesday night apologizing for the “hurt caused to those most important to me - my family, my players, and my program.” He was cited on Monday night in the town about 30 miles east of the Gonzaga campus.

“I believe as a leader and role model, I am expected to set only the best example. The decisions I made yesterday do not exemplify this standard and for that, I sincerely apologize to you all. I recognize that operating a motor vehicle after consuming any amount of alcohol exhibits poor judgment,” Few said in his statement.

“Regardless of the outcome of the pending investigation, I will never allow such a lapse in judgment to occur again. Please know that I am committed to learning from this mistake and will work to earn back your trust in me.”

Few was stopped by Coeur d'Alene police around 8 p.m. Monday after he was “called in as driving erratic and speeding," according to a police report.

The report stated that Few exhibited “several signs of intoxication” and that he refused to complete field sobriety tests. Few provided breath samples of .119 and .120, which is above the legal limit of .08, the report stated.

“While the facts of the situation are still being evaluated, we understand its severity and the legal process that will follow," Standiford said. "As a Gonzaga employee, we respect Coach Few’s right to privacy and will refrain from further comment at this time.”

The Coeur d’Alene Press and Spokesman-Review first reported about Few being cited.

Few has been the head coach for the Bulldogs for 22 seasons and is 630-125 in his career. Gonzaga lost to Baylor in the national championship game last April.