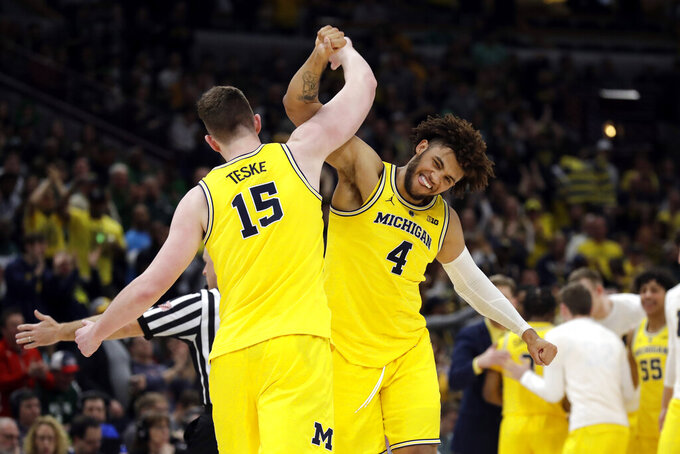 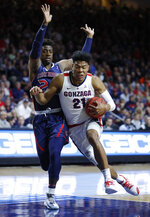 The loss to Saint Mary's was not enough to make the NCAA Tournament selection committee move the top-ranked Bulldogs off the No. 1 line.

Gonzaga earned a No. 1 seed in the NCAA Tournament for the third time in seven years on Sunday, topping a difficult West Region that includes Michigan, Texas Tech, Florida State, Marquette, Buffalo, Nevada and Syracuse.

The lower seeds include Baylor, Murray State, Vermont, Northern Kentucky and Florida. Arizona State and St. John's will play in the First Four on Tuesday in Dayton, Ohio. The West Region concludes March 28-30 in Anaheim, California.

Gonzaga (30-3) opens the NCAA Tournament on Thursday against the First Four winner between Farleigh Dickinson and Prairie View A&M.

"Especially the way this year has went, I think everybody started talking, thinking about this quite a while ago," Gonzaga coach Mark Few said. "It's a great day. It's an honor to be a No. 1 seed. There's some very, very good teams out there this year and there were a bunch of them that were definitely deserving of consideration for a 1 seed. I'm sure it was a pretty tough choice."

The Zags will open the NCAA Tournament in Salt Lake City, where they don't have the fondest of memories.

Gonzaga was a No. 1 seed for the first time six years ago and flopped in Salt Lake City, losing to eventual Final Four team Wichita State.

Should the Zags get past the First Four winner, they could face a tough matchup in the winner of the game between Syracuse and Baylor.

The good news: Gonzaga has everyone healthy.

The Bulldogs have played most of the season without forward Killian Tillie due to foot injuries, yet kept steamrolling opponents. Gonzaga beat Duke in the Maui Invitational title game and had a perfect regular-season run through the WCC, setting a conference record for margin of victory at 27 points per game.

Tillie returned for the WCC tournament semifinals and even though Gonzaga scored a season-low 47 points in the title game, it has one of the nation's most talented rosters.

"We've had pressure the whole season on us," Gonzaga big man Brandon Clarke said. "It's something we're all used to by now. We're going to take it like it's any other game, but we have to make sure we're all focused and we're all ready."

The Zags will be tough to beat, even if they do open in Salt Lake City again.

MUST-WATCH GAME: The West Region includes one of the most intriguing first-round matchups in the bracket.

No. 5 seed Marquette and No. 12 Murray State not only are exciting teams to watch, they have two of the nation's most dynamic players.

Markus Howard, Marquette's 5-foot-9 shoot-from-anywhere guard, is the nation's fifth-leading scorer at 25 points per game. He had a Big East-record 53 points against Creighton and scored 45 twice, including a 40-point second half against Buffalo.

Murray State's Ja Morant may have played himself into being a lottery pick during his sophomore season, dazzling by scoring in bunches and dunking over bigger players with regularity. He led the nation in assists with 10.0 per game and was eighth in scoring at 24.7 points per game.

Block out time on your calendar for this game Thursday in Hartford, Connecticut.

TOUGH BRACKET: Teams in the West Region could make an argument they're playing in the bracket's toughest region.

Gonzaga may have more talent than the team that went to the national title game two years ago. Michigan opened its season with 17 straight wins after playing for a national championship last season and made it to the Big Ten title game.

Florida State is long, athletic and finished fourth in the ACC, arguably the nation's toughest conference. Marquette and Murray State each have players who can carry a team deep into the bracket in Howard and Morant. Buffalo has a veteran team that knocked off Arizona in the NCAA Tournament last year and swept the Mid-American Conference regular-season and tournament titles.

Syracuse and its difficult-to-decipher zone are almost always a problem in the NCAA Tournament, Nevada and Baylor have the talent to compete with anyone.

Whatever team gets through the West will have earned it.

FIRST FOUR SWEAT OUT: Arizona State and St. John's had some anxious moments on Selection Sunday.

Both were considered bubble teams and both had to wait until near the end of the reveal show to find out if they were in.

Bobby Hurley's Sun Devils will be making consecutive NCAA Tournament appearances for the first time since 1979-81, despite losing in the Pac-12 tournament semifinals.

St. John's appeared to be in trouble after being stomped by Marquette in the Big East tournament, but had two previous wins over the Golden Eagles and knocked off another NCAA Tournament team in Villanova to reach the NCAA Tournament for the first time since 2015.