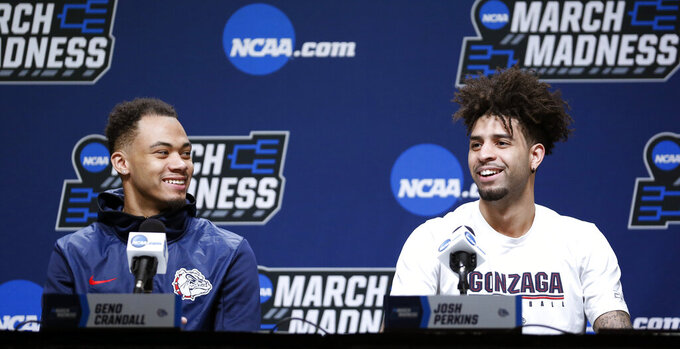 SALT LAKE CITY (AP) — Gonzaga enters the NCAA Tournament following a loss for one of the rare times under coach Mark Few.

The dominant team in the West Coast Conference for two decades, the Zags lost to Saint Mary's in the conference title game last week in Las Vegas.

The players have put it behind them.

Few hasn't completely — and may never.

"I would say that is definitely not my strong suit," Few said Wednesday. "As a flawed human being, that would be an area I can work on better."

Gonzaga never was able to establish its up-tempo style in the title game and the Gaels rolled to a 60-47 win to earn the conference's automatic NCAA Tournament bid. The loss ended the Zags' 21-game winning streak and their six-year reign as WCC tournament champions, but didn't dissuade the NCAA Tournament selection committee from giving them the No. 1 seed in the West Region.

The Zags are expected to roll over the Knights, but will take nothing for granted, particularly after seeing No. 1 Virginia lose to No. 16 Maryland-Baltimore County a year ago at this stage. Gonzaga also is entering the NCAA Tournament after a loss for the first time since 2012.

"As a one seed, everyone is coming after you and they want to beat you," Gonzaga guard Josh Perkins said. "They will come in here with nothing to lose, play with reckless abandon. Being a one seed, we have to know that going in and master intensity and control what we can control."

The Knights twice trailed by 13 in their First Four game against Prairie View A&M before rallying for an 82-76 victory and the program's first NCAA Tournament win.

Fairleigh Dickinson coach Greg Herenda, who was ill with life-threatening blood clots less than a year ago, danced on the court following the victory, but quickly turned his attention to Gonzaga. The Knights arrived in Salt Lake City late Tuesday night and had their team meeting at 2 a.m. before practicing Wednesday afternoon.

"We have to stop celebrating," he said. "You'll be able to celebrate the first NCAA victory for Fairleigh Dickinson University for the rest of your lives. Now we have 24 hours to prepare for a team that is really, really good."

HOWARD SUSPENDED: Syracuse will play its first NCAA Tournament game since 2016 without one of its key players.

The school announced Wednesday that senior guard Frank Howard is out "for an indefinite period of time" for violating school policy.

The 6-foot-5 Howard lit up social media during the ACC tournament against Duke last week when he appeared to stick his foot out as Blue Devils star Zion Williamson ran by. Howard denied trying to trip Williamson and the school did not say if the suspension was related to the alleged attempt.

Howard had an up-and-down season, but scored 28 points against Duke and played well in the ACC tournament with Tyus Battle out due to an injury. He averages 8.9 points and 2.0 assists.

FAMILIAR TERRITORY: For the second straight season, Murray State finds itself in a 5-12 game in the NCAA Tournament.

The Racers lost 85-68 to West Virginia in the first round last year in San Diego and hope the experience makes them better prepared for another tournament game. Murray State is the 12 seed against fifth-seeded Marquette in a West Region game being played in Hartford on Thursday.

Morant had 14 points on 5 for 10 shooting and three blocked shots against West Virginia, and Buchanan managed just six points.

"I would say last year was our first time so guys are happy to be there," Buchanan said. "But this year with me and Ja and Brion, we have the focus that we can go far in this tournament. We have the team to do it."

COMMUNICATING CATAMOUNTS: Vermont coach John Becker believes a key to his program's success has been his ability to communicate.

Becker learned the value of that as an assistant and later head coach in the 1990s at Gallaudet University, where his athletes were deaf or hearing impaired and he had to learn sign language to get his points across.

"We take for granted that communication piece," he said. "And I never have since then. We over-communicate in our program here and we understand the importance of that and the value of that and how easy it is for us."

Communication and help defense will be important for a team whose big man, Anthony Lamb, is 6-foot-6. The Seminoles have three starters taller than that, including 7-4 Christ Koumadje, and 6-10 Mfiondu Kabengele, the ACC sixth man of the year, coming off the bench.

MONTANA-MICHIGAN REMATCH: No. 15 seed Montana (26-8) has the full attention of Michigan coach John Beilein. The teams are meeting in the first round for the second straight year.

"I hope it doesn't go the way it did last year," he said. "They were ahead of us 10-0 to the start the game, and they have a lot of guys back. We are a little brand new to playing in this type of game. They know Montana is even better than they were last year."

The Grizzlies, who won the Big Sky regular-season title and tournament, are 15-point underdogs.

"We've had a few games where the bull's eye wasn't on our backs, and those were the ones that our guys performed best at, whether we were on the road or we found ourselves in second or third in the standings and we were trying to get back to the top," Montana coach Travis DeCuire said. "We played with a high level of desperation. I think for a rematch our guys will go into the game the same way."

WOLF PACK GATOR BAIT?: Jalen Hudson of Florida (19-15) didn't sound like a man whose team is the lower seed for its game against Nevada (29-4) in Des Moines.

"They're a very experienced team. Obviously, they have had a lot of success," Hudson said. "They are a mid-major team, though. I don't think they've seen a team like us in a long time."

Granted, the seventh-seeded Wolf Pack (29-4) of the Mountain West haven't played the most rigorous schedule, but they are 3-0 against Pac-12 opponents Southern California, Arizona State and Utah.

AP Sports Writers Ralph Russo and Pat Eaton-Robb in Harford, and Eric Olson in Des Moines contributed to this story.