Gonzaga's bid for perfection begins with No. 1 overall seed 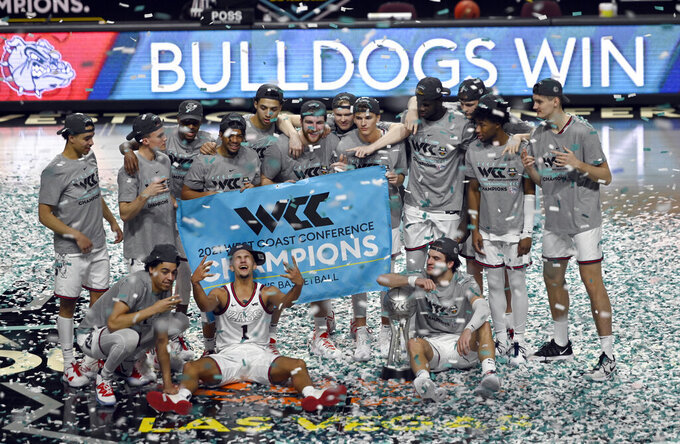 Gonzaga's road to perfection will be filled with familiar faces.

The Bulldogs were the No. 1 overall seed in the NCAA Tournament bracket announced Sunday as they try to become the first team in 35 years to complete a perfect season.

Gonzaga is the top seed in the West Region for the all-in-Indiana bracket that starts this week and the next three seeds are teams it has already beaten — all by double digits.

Gonzaga won every game this season by double digits except for one — when star freshman Jalen Suggs was injured — and has a school-record 30-game winning streak over two seasons.

The Zags are the first team since Kentucky in 2015 to enter the NCAA Tournament undefeated and have their sights set on the 1975-76 Indiana Hoosiers, the last team to finish a perfect season.

“We finally acknowledged this is a big deal,” Gonzaga coach Mark Few said. “It puts us in some incredible company. It’s a heck of an accomplishment.”

Gonzaga opens the tournament Saturday against the First Four winner between Norfolk State and Appalachian State. Get by that and the Zags will play the winner between No. 8 Creighton and No. 9 Missouri.

Kansas and Virginia have to be thankful the NCAA not only pushed back the start of the tournament but put them in a region that begins on Saturday.

Both teams had to bow out of their conference tournaments before the semifinals due to positive COVID-19 tests and the extra time should allow them to have their full rosters available.

No. 11 Kansas held out David McCormack and Tristan Enaruna before the Big 12 Tournament started due to positive tests, then had another before it was supposed to play No. 13 Texas.

All three players remained in Kansas City after the tournament, but McCormack and Enaruna are expected to rejoin the team this week. The third, unidentified player will have to miss the first weekend of the tournament.

“Since that's the draw we got, I might as well be comfortable with it and like it,” Kansas coach Bill Self said. “I certainly don't dislike it.”

No. 16 Virginia, which won the last national championship in 2019, had to bow out of its Atlantic Coast Conference Tournament game against eventual champion Georgia Tech due to a positive test.

Kansas opens against Big Sky champion Eastern Washington and Virginia plays Mid-American Conference champ Ohio, which made the field of 68 for the first time since 2012.

Wichita State’s return to the tournament for the first time since 2018 couldn’t have gone down a bumpier road.

The Shockers appeared to be headed toward a rebuild when seven players transferred from last year’s team and coach Gregg Marshall took a buyout just before the season started after being accused of verbally and physically abusing players.

Wichita State also had nine games postponed or canceled due to COVID-19 issues.

The Shockers (16-5) rallied behind interim coach Isaac Brown, who was hired full time late in the season, to reach the American Athletic Conference semifinals. A loss to Cincinnati led to some tense moments on Selection Sunday, but Wichita State made the field as a No. 11 seed and will open against Drake in the First Four.

Grand Canyon has a difficult opening game, facing Iowa on Saturday. The 15th-seeded Antelopes will enjoy their trip to Indianapolis no matter what happens.

Grand Canyon lost to New Mexico State in the Western Athletic Conference Tournament title game for two straight years under previous coach Dan Majerle. The Antelopes finally got over the hurdle in their first year under coach Bryce Drew, beating the Aggies 74-56 in Las Vegas to reach the NCAA Tournament for the first time in eight years as a Division I program.

Drew knows a little something about NCAA Tournament drama, hitting a game-winning 3-pointer for Valparaiso against Mississippi 23 years ago, so you never know.

REST OF THE REGION

The sixth-seeded Trojans open with the Wichita State-Drake winner and the Ducks face Virginia Commonwealth in a battle of two tenacious defenses.

Games between No. 5 and No. 12 seeds are always popular upset picks and Santa Barbara over Creighton will likely show up in a few brackets across the country.

No. 5 Creighton had a 20-win season that included victories over NCAA Tournament teams Georgetown, Villanova and two over Connecticut. The Bluejays also have one of the bracket's best players in Marcus Zegarowski, but have had games where they've gone cold shooting, including the Big East title game.

The Gauchos are in the bracket for the first time since 2011, but have lost once since Jan. 1 and beat UC Irvine in the Big West title game.