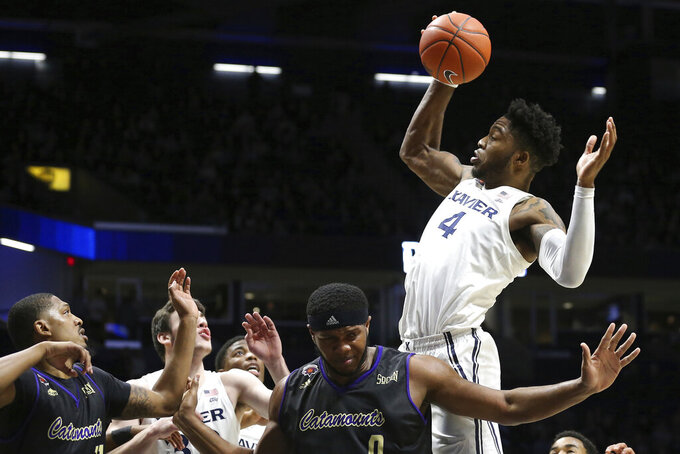 Xavier forward Tyrique Jones (4) rebounds the ball during the first half of an NCAA college basketball game against Western Carolina, Wednesday, Dec. 18, 2019 in Cincinnati. (Kareem Elgazzar/The Cincinnati Enquirer via AP) 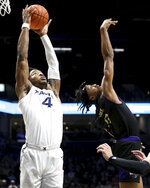 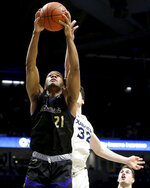 CINCINNATI (AP) — After the loss to Wake Forest on Saturday, Xavier head coach Travis Steele met with his senior players and challenged them to improve their play. On Wednesday night, point guard Quentin Goodin was the one who responded.

The Musketeers' point guard was 9-of-11 shooting and 4-for-4 from three-point range helping them overcome the absence of leading scorer Naji Marshall and 18 turnovers to improve to 10-2.

“He gave us reality,” said Goodin, of the meeting with Steele. “He just upped the standard. It's him just trying to get us better. He stays on us. If he doesn't keep pushing us, we're not going to reach our expectations.”

Freshman forward Zach Freemantle added 13 points for the Musketeers who were without Marshall after the junior forward came down with a stomach virus. Marshall averages 16.9 points and 5.9 rebounds.

“He got sick late last night," Steele said. "We tried giving him fluids today. He wanted to play but just couldn't do it. (Athletic trainer) David Fluker made the decision about two hours before the game.”

Xavier, coming off an 80-78 loss at Wake Forest, built an 11-point lead in the first half, but without Marshall they struggled to score.

The Musketeers went more than three minutes without scoring in the first half and missed nine straight shots. Second-leading scorer Paul Scruggs had five points and six turnovers in the half.

Xavier led by three points at halftime behind Goodin's 10 points.

“He played like a senior,” Steele said. “I thought he took good shots. He didn't force things. He had command and that's what he needs to do.”

But Western Carolina built a seven-point lead within the first five minutes of the second half, and Steele called two timeouts within 23 seconds to stem the tide. This came during a four-minute stretch in which the Catamounts scored 21 points.

“For everybody who wasn't in the huddle, I'll keep it clean," Goodin said. "We just had to get everybody together and get this right. Giving up that many points like that was not a good look.”

The Musketeers responded with a 13-2 run over six minutes to regain the lead. A three-pointer by Carter put Xavier up 67-57 with 3:40 left. Goodin wrapped up the scoring with his fourth three-pointer of the night.

“I didn't see this game coming,” said Goodin of his career night. “I wanted to be more aggressive. I knew we didn't have Naji.”

The Skip Prosser Classic honoring former Xavier and Wake Forest head coach Skip Prosser was expanded this season to include Wednesday's game against Western Carolina, which is coached by Prosser's son, Mark. Skip Prosser was head coach at Xavier from 1994 to 2001. He coached Wake Forest from 2001 to his death in 2007. “This (game) was a little different for me,” Mark Prosser said. “My personal feelings didn't impact our kids. They play hard no matter what. To honor my father in this way is very special for my family. It was fun to be a part of it.”

Despite having four returning starters from last season, Xavier has struggled to find its rhythm on offense. The absence of Marshall was a factor on Wednesday, but taking care of the ball has been an ongoing issue. The Musketeers average more than 13 turnovers. On Wednesday, they had 11 of their 18 turnovers by halftime. The 18 turnovers are tied for the most since Xavier had 18 in a loss to Florida on Nov. 24. The season-high for the Musketeers is 21 in an overtime win over UConn on Nov. 22.