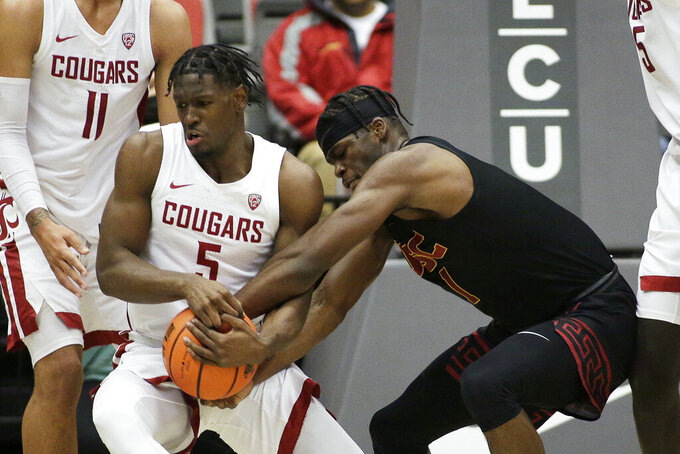 PULLMAN, Wash. (AP) — Chevez Goodwin sank a layup and a free throw with 16 seconds left to lift undefeated No. 20 Southern California to a 63-61 victory over Washington State on Saturday.

The Trojans made their last four field-goal attempts for the comeback win.

Michael Flowers scored 13 points to lead Washington State (6-2, 1-1). Noah Williams finished with 12 points, but missed two shots in the closing seconds — including a 3-pointer at the buzzer that would have given the Cougars the win.

In a back-and-forth game, Southern California’s offensive efficiency (50% from the field) proved to be too much for the Cougars, who shot just 38%

TJ Bamba hit a go-ahead 3 to give the Cougars a 61-60 lead with 31.4 seconds left, setting up Goodwin's game-winning shots. Bamba finished 3-for-3 from behind the arc.

Washington State made its first four field goal attempts to take an early lead, and led 32-30 at halftime despite going over seven minutes without a field goal.

“It’s a terrific road win for us against a very good team at home,” Southern California coach Andy Enfield said. "I thought our guys just gutted it out. We played very hard on both ends, got the defensive stop we needed to, and then we made the big play at the end.

“We put our length in there, we put Max and Drew at the wings ... so we can have the most length we could for the last 30 seconds,” Enfield said.

Washington State coach Kyle Smith got another good defensive effort from his team, which held Arizona State to just 29 points in its previous game.

“We just weren’t fortunate tonight to get that one to drop,” Smith said of Williams' final shot.

“They’re tough, they’re able to switch things, and like I said their size and length,” he said of Southern California.

Southern California made just 2 of 12 from 3-point range, while Washington State sunk 8 of 20. But the Trojans had a 38-28 advantage in the paint that proved decisive.

Washington State: The Cougars were undone by making only 22 of 58 field goals.