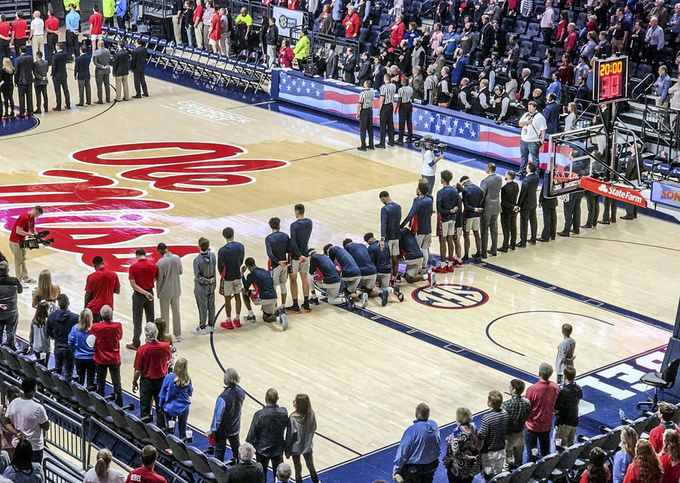 JACKSON, Miss. (AP) — Mississippi Gov. Phil Bryant said Tuesday that he hasn't given much thought about the Ole Miss basketball players who knelt during the National Anthem to protest a pro-Confederate gathering on campus.

"I've been in Washington and I've been dealing with the storms and just haven't had much of a chance to look at it," Bryant said at the state Capitol, responding to a question from The Associated Press.

Republican Bryant, who is in his eighth and final year as governor, was in Washington during the weekend for a National Governors' Association meeting and other activities. He issued an emergency declaration Monday because of tornadoes and flooding since Friday in Mississippi.

Eight University of Mississippi players knelt Saturday before a home game in Oxford.

"We're just tired of these hate groups coming to our school and portraying our campus like we have these hate groups in our actual school," the team's scoring leader, Breein Tyree, said during a news conference after the game.

Security was tight as about 100 people carrying rebel flags and Mississippi's state flag, which includes the Confederate battle emblem, gathered Saturday near a Confederate soldier statue on campus to protest what they see as threats to symbols of the Old South. About the same number of counter-protesters also gathered on campus with signs reading, "Y'all Lost" and "Black Lives Matter." The two groups yelled at one another from behind barricades about 100 yards (91 meters) apart.

Racial conflict has been a recurring theme at Ole Miss for many years. In 1962, the campus that was rocked by violence after court-ordered integration.

The nickname for athletic teams remains the Rebels, but Ole Miss retired the Colonel Reb mascot in 2003 amid criticism that the bearded old man looked like a plantation owner. In 1997, administrators banned sticks in the football stadium, which largely stopped people from waving Confederate battle flags. The marching band no longer plays "Dixie."

The university announced in 2014 that it would provide historical context for Old South symbols as a way to acknowledge its complex history and to make a diverse student body feel more welcome. In 2016, Ole Miss added a plaque with information about slavery and the Civil War to the Confederate soldier statue that has been on campus since 1906.

Bryant in the past has declared April as Confederate Heritage Month.

"I believe Mississippi's history deserves study and reflection, no matter how unpleasant or complicated the matter may be," the governor said after making the declaration in 2017. "Like other governors before me who issued similar proclamations for over the last two decades, I also believe gaining insight from our mistakes and successes will help us move forward."

Bryant also said in September that he supported the Mississippi Department of Public Safety's decision to stop buying Nike gear because the company was using former San Francisco 49ers quarterback Colin Kaepernick in an ad campaign. Kaepernick began kneeling during the national anthem in 2016 to protest police brutality and social injustice.

Bryant said then that Public Safety Commissioner Marshall Fisher has the right to choose vendors for the department "and it's not going to be a company that pays an individual who has slandered our fine men and women in law enforcement."