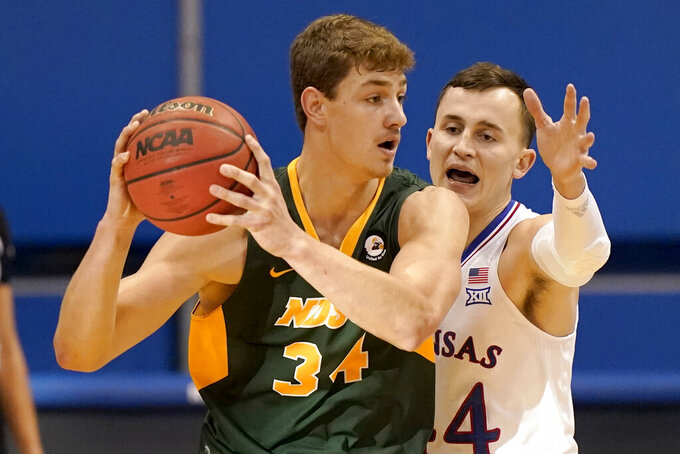 LAWRENCE, Kan. (AP) — The blueblood nature of Kansas means coach Bill Self rarely needs to mine the junior college ranks for talent.

The transfer from Indian Hills Community College drove for the go-ahead basket with just over a minute to go Saturday, then swatted away Sam Geisel's layup with 10 seconds left, helping the sluggish seventh-ranked Jayhawks escape with a 65-61 victory over North Dakota State.

“Tyon was great, great, great down the stretch,” said Self, who wound up playing him more than 21 minutes off the bench. “I was really happy for him because he hasn't had many opportunities yet.”

Jalen Wilson had 14 points and 15 rebounds, and Ochai Agbaji added 13 points, including a free throw in the final seconds that helped Kansas (4-1) finish off a 7-0 run to end the game inside a mostly empty Allen Fieldhouse.

“Those are the fun ones," Agbaji said, “when the other team is in it.”

Kansas trailed 61-60 when Grant-Foster skated between two defenders for the go-ahead layup. North Dakota State (0-4) promptly turned it over with an offensive foul and then, after two free throws by Christian Braun at the other end, Grant-Foster made his mark on the defensive side.

“I knew No. 5 was going to shoot it and once he did the spin, I knew he wasn't going to see me coming over because he turned his back to me,” Grant-Foster said. “And I love blocking shots, so I knew I was going to go get it.”

“That's on me. I have to put them in a better position down the stretch to finish things,” North Dakota State coach David Richman said. “We're not into this thing for moral victories.”

After romping past Division II Washburn on Thursday night in their first home game of the season, the Jayhawks had their hands full with the first Division I foe of their five-game stand at the Phog.

In fact, the Bison ripped off the first eight points of the game and trailed just 35-33 at halftime.

The second half is when the Jayhawks usually assert control against unranked opponents — their last such loss in the Phog was in February 2018. But with only about 100 friends and family on hand because of the pandemic, there was none of the raucous noise and intimidating mystique that has given them such a home-floor advantage over the years.

North Dakota State gave up the first bucket of the second half but then ripped off an 11-2 run, at one point forcing Self to burn a timeout. And the Bison still led 51-44 with 12 minutes to go on a 3-pointer from Maleeck Harden-Hayes before the media timeout allowed the Jayhawks to gather their wits.

They responded with nine quick points of their own, suddenly attacking the basket with newfound aggression, only for North Dakota State to keep coming up with answers. The Bison hit a couple of baskets late in the shot clock, doing their best to shorten the game, and were left clinging to a 61-60 lead when Kansas called timeout with 1:38 to go.

That's when Grant-Foster made the plays that defined the game.

“I thought he was playing better defense,” Self said, “and as he continues to play better defense, he’ll play more, and as he plays more his offense will come, because he's a very talented offensive player.”

North Dakota State has become a regular NCAA Tournament program and, despite losing a lot of scoring from last year's 25-win team, appears to have a chance to turn around its 0-4 start. The Bison took No. 9 Creighton, which visits the Phog on Tuesday night, down to the wire before losing last week.

Kansas had been hitting more than eight 3-pointers per game, but it was 4 of 15 from beyond the arc and just 13 of 19 from the foul line. And without much inside presence from David McCormack and Mitch Lightfoot, that poor shooting just about doomed the Jayhawks to a rare home loss.