Group licensing: A new way for college athletes to cash in 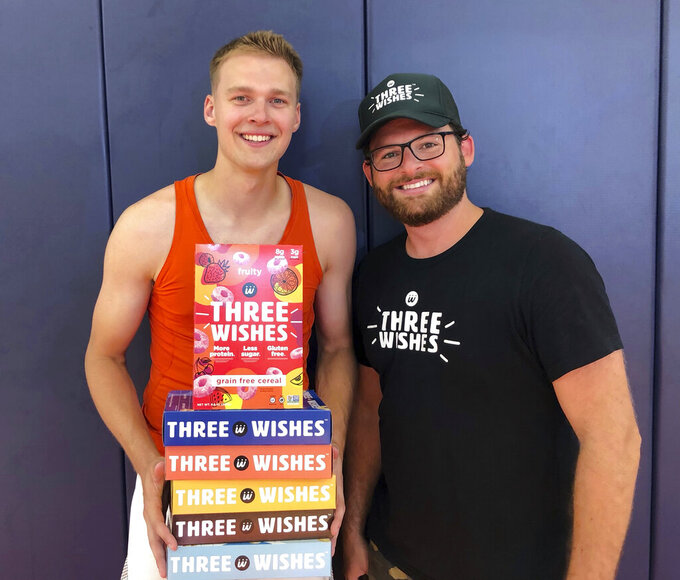 In this image provided by Three Wishes Foods, Syracuse's Buddy Boeheim, left, poses with Three Wishes Foods co-founder Ian Wishingrad on Wednesday, July 14, 2021, in DeWitt, N.Y. A new era in college sports got underway at the beginning of July, and with players now allowed to make money on their celebrity it's anybody's guess where this is all headed. Boeheim, the sharp-shooting son of Syracuse men's basketball coach Jim Boeheim, inked a deal that will put his likeness on the front of a cereal box with him shooting, a morsel of Three Wishes cereal in his right palm. . (Scott Yager/Three Wishes Foods via AP) 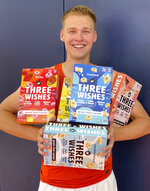 With college athletes able to profit from their fame for the first time, North Carolina opened a new path Tuesday for its players to cash in: group licensing for official Tar Heels merchandise.

North Caorlina is believed to be the first school in the nation to launch a group licensing program for current athletes. Under the partnership with The Brandr Group, athletes will receive a cut of net revenue for merchandising opportunities pursued by TBG with products that include the school's official trademarks and logos.

Participating in the voluntary program won’t restrict individual endorsement deals now that college athletes across the country are clear to profit from use of their name, image and likeness as of July 1.

“The manufacturers are the experts in the market to know what fans want,” Tar Heels athletic director Bubba Cunningham said in an interview with The Associated Press. “So if our retailers and licensees think a jersey sale would be absolutely terrific, then they’re going to sell jerseys.

"It might be that posters of our gymnastics team are what all the little girls that come to the meet want, so maybe that’s what it’ll be for gymnastics. For the baseball team, maybe it’s trading cards.”

Athletic logos, trademarks and mottos are considered among the most valuable brand assets an athletic department has and lawsuits are not uncommon as schools protect them. Athletes had long been barred from earning money off this kind of merchandise but NIL has dramatically changed the landscape.

Cunningham said sales of Tar Heels merchandise could be tracked to compensate athletes based on sales of their individually marketed items such as jerseys, while athletes would share money more broadly for group items such as a poster featuring multiple athletes. Athletes could join a group of three or more within a single sport, or at least six across multiple sports.

“What we have found in college athletics in the last 30 years is the aggregation of rights generates a bigger pool to be shared by the participants,” Cunningham said. “You do it individually, there are a handful of individuals that can do very well. But the vast majority will do better financially if you aggregate the rights.”

Charles Clotfelter, a public policy and economics professor at Duke, said group licensing for current athletes adds another layer to what is already “a whole new world” with permissible NIL activities.

“Universities have taken it upon themselves to just commercialize their own name," said Clotfelter, who has written about the commercialization of college sports. "So now we’ve just got one more set of factors that are being able to share in this, and there is a certain kind of justice there.”

Cunningham had previously backed group licensing models as a broader alternative to athletes pursuing individual deals, and UNC had launched an alumni one this year benefiting former men’s basketball and women’s soccer players. He predicted most schools would create group licensing programs for current athletes.

He also referred to the expected return of EA Sports’ college football video game series, which the NCAA had stepped away from in 2013 after it was sued for not sharing game revenue with college athletes in the so-called O'Bannon case.

“If EA is going to bring a video game back to the market, they need to gather all the rights of all the student-athletes playing football,” Cunningham said. “And the simplest way for them to do that is someone else to aggregate the rights of those individual students and get them to EA.”

At Michigan, the school isn’t freely allowing its trademarks to be used by athletes in NIL deals as some other institutions are across the country. But Wolverines football players recently became the first to strike a deal in which they make money for every custom-made jersey sold with their name and number by the M Den, the athletic department’s official retailer.

Valiant Management, which was founded by former athletes at the school, has agreements with 90 current Wolverines and has extended the opportunity to every player on the football team.

The M Den was able to pull off the plan as an official school retailer with a Nike deal that allows for it to order and sell custom-made jerseys.

At Syracuse, basketball player Buddy Boeheim — the son of longtime coach Jim Boeheim — encountered that obstacle when shooting a promotional video ahead of his image appearing on a box of Three Wishes cereal.

Syracuse alumnus and basketball fan Ian Wishingrad — who developed Three Wishes with his wife and has it in 2,000 grocery stores nationwide — shot the video last week in the Boeheim home gym. But he had to position a rack of balls to obscure the word “Syracuse” on the court.

“Hopefully, this really works for us,” Wishingrad said. “We’re going to see how this goes. If it’s very successful, it proves that this is a very good thing for us.”

The player nicknamed “Buddy Buckets" was “a little surprised at first” by the offer, while his mother, Juli, negotiated the deal after sifting through offers. He intends to donate money to local charities and said the goal going forward is for every member of the basketball team to reap a profit. A team camp for kids is being planned for early September.

“It’s exciting," he said. "It’s a crazy time, but I think there’s so many good directions you can take this. As long as you’re doing it the right way, I think it’s a very good thing.”