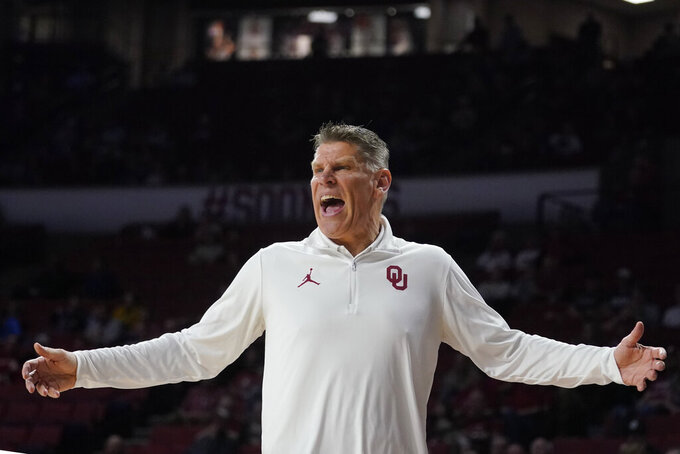 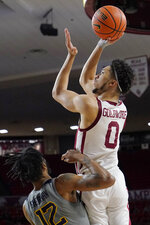 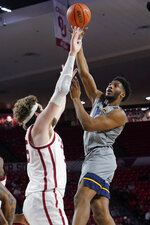 Oklahoma (16-14, 6-11 Big 12), which beat in-state rival Oklahoma State 66-62 last Saturday, has won back-to-back games following a four-game skid. The Sooners can secure the No. 7 seed — and a first-round bye — in next week’s conference tournament with a win in their season-finale Saturday at Kansas State.

Groves finished with 17 points — 15 in the second half — and 10 rebounds. Jalen Hill added 10 points and Jacob Groves, Tanner's younger brother, hit 3 of 4 from 3-point range and scored nine for Oklahoma.

West Virginia has lost seven in a row and 14 of its last 15.

Tanner Groves was fouled as he threw down a two-hand dunk and hit the and-1 free throw to ignite a 21-12 run over the final 6-plus minutes. He added two 3-pointers and a layup and Goldwire scored seven points down the stretch.

CJ Noland hit a 3-pointer and Hill sandwiched two baskets around a layup by Noland in a 9-0 spurt that gave the Sooners a five-point lead midway through the first half and the Moutnaineers trailed the rest of the way. West Virginia's Sean McNeil and Jalen Bridges each made 2-of-2 free throws before Jacob Groves made two 3s and Chargois added another from behind the arc as Oklahoma scored 13 consecutive points to cap a 22-4 run that made it 28-14.

The Mountaineers went more than 10 minutes without a field goal before Cottrell hit a 3-pointer with 4:06 left in the first half to spark a 10-0 closing run and Paulicap made a layup in the opening moments of the second half to cut their deficit to 28-26, but Groves answered with a jumper on the other end and they got no closer.

West Virginia returns home to play Saturday against TCU in the regular-season finale. The Mountaineers will be the No. 9 seed in the Big 12 Tournament and plays either the Sooners or Kansas State in Wednesday's first-round game.

Oklahoma wraps up its regular season at Kansas State — which has lost four straight games — on Saturday.