Guy, No. 4 Virginia stay perfect with 63-43 win over Clemson 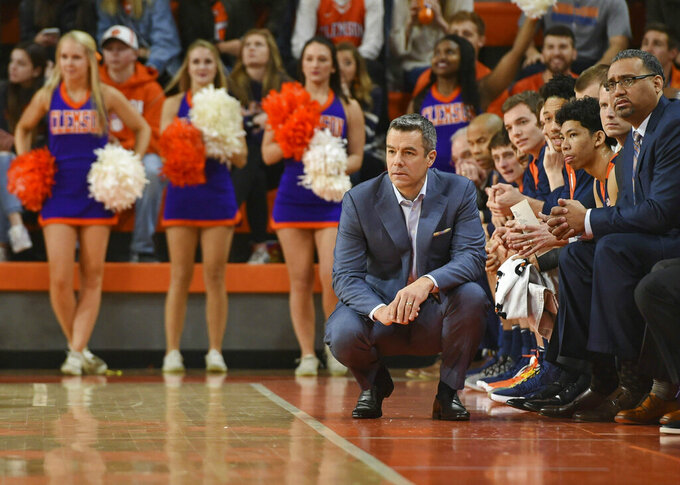 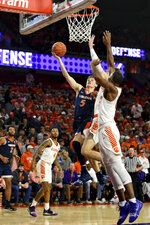 CLEMSON, S.C. (AP) — Kyle Guy is happy for any win. He savors it just a bit more, though, when it comes on the road.

Guy and undefeated No. 4 Virginia have had plenty to celebrate on that front lately.

Guy had 13 points, De'Andre Hunter scored 12 and the Cavaliers improved to 15-0 with a 63-43 victory at Clemson on Saturday. It was also Virginia's 12th straight ACC road win, the fourth best such run in league history.

"It's not easy or everyone would be doing it," Guy said. "But we're bred a little bit differently. We train for this. Yeah, our legs are tired, but we've practiced for this endurance."

Clemson started the day with a national championship football parade and party just a few steps away at Death Valley. The basketball Tigers (10-6, 0-3 Atlantic Coast Conference) had hoped to add to the good feelings with their first win over Virginia since 2012.

Instead, the Cavaliers (3-0 ACC) turned up their trademark defense to make it a long afternoon for Clemson and keep their status as the only undefeated team left in the conference this season.

Virginia coach Tony Bennett preaches "road ball" to his players throughout the year, knowing how important it is to get your share of wins on the road in a competitive and difficult league like the ACC.

"If you're sound and your game doesn't change, regardless of the environment, it can allow you, if you're home or on the road, to stay true to that," Bennett said. "This team, they don't get outside of themselves."

That was a big reason the Cavaliers didn't flinch when Clemson cut a double-digit lead to 29-27 early in the second half on Marcquise Reed's driving basket. Virginia followed with an 18-5 run when it made five 3-pointers to restore the lead and cruised to its ninth straight victory over the Clemson.

Clemson started 0-3 in ACC play for the first time since losing its first five league games in 1999-2000.

Reed was Clemson's only double-figure scorer with 14 points, but he shot just 3 of 14 from the field and missed his five 3-point attempts.

Tigers forward David Skara said the players knew how difficult their opening stretch — road games at top-ranked Duke and Syracuse, home against No. 4 Virginia — was and were prepared for the possibility of losing them all. While disappointed, they're not discouraged, he said.

Virginia: The Cavaliers are steady, relentless and precise on both sides of the ball. Ty Jerome, a double-digit scorer, had not made a field goal in the opening half, yet hit two critical 3s in Virginia's decisive run in the second half. He finished with eight points.

Clemson: The Tigers have lost three straight ACC games, and each time they struggled to score early. They trailed Duke 40-33 at the break and lost 87-68, then were down 40-32 at Syracuse in a 61-53 loss. In this one, Clemson trailed by 12 points in the first half and, despite cutting things to 29-27 early in second, could not stay close.

Clemson's bad shooting show, the fourth worst shooting performance in team history, means three of the Tigers poorest shooting games came against the Cavaliers. The worst ever came in 1994 when the Tigers shot .238 at Virginia, while the second worst came the next season, also at Virginia.

Clemson is home against Georgia Tech on Wednesday night.