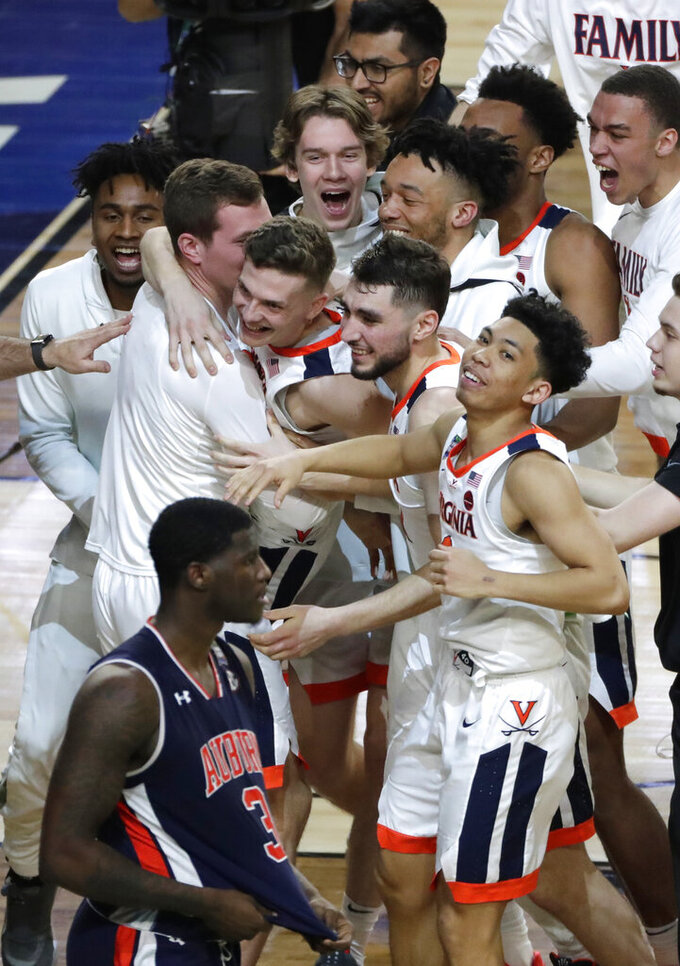 MINNEAPOLIS (AP) — Hard to call Virginia basketball boring after the last two games. And the Cavaliers have pretty much put the choker label to rest, too.

From one-and-done to NCAA Tournament miracle men, Virginia will play for the national title for the first time after pulling off another last-second stunner. Kyle Guy made three free throws with 0.6 seconds left, steadily swishing each one as debate immediately started over the sequence that sent him to the line, and Virginia beat Auburn 63-62 Saturday in the Final Four.

A year after becoming the first No. 1 seed to lose to a No. 16, these top-seeded Cavaliers now look like destiny's team.

"It's a great story," Virginia coach Tony Bennett said. "It is."

The Cavaliers (34-3) will face Texas Tech on Monday night as the slight favorite to win the tournament.

Bennett has built a powerhouse in 10 years in Charlottesville on a style of play that is often about as exciting as a trip to the campus library. The Cavaliers have gotten straight A's in the regular season with stingy defense and walk-it-up offense, but NCAA success has been hard to come by. Blown leads and early exits have been their story — never more than when the Cavaliers lost to UMBC, a school known for chess, not hoops.

Something has gotten into these Wahoos the last two weeks, though. They reached the Final Four for the first time since 1984 with a wild buzzer-beater by Mamadi Diakite to send their Elite Eight game against Purdue to overtime. Beating the Tigers took an even crazier finish.

Fifth-seeded Auburn (30-10) had erased a 10-point deficit in the final five minutes and taken a 4-point lead. Heartbreak was again at hand for Virginia.

The Tigers led 61-60 after Guy made an off-balance 3 with 7.6 seconds left. The shot snapped a drought of more than five minutes by the Cavaliers, who then immediately sent Jared Harper to the line.

Harper made one and Auburn, with fouls to give, did so twice. On one of them, it looked as if Ty Jerome might have double-dribbled into a decisive turnover. Jerome also might have been fouled before the mishandle. But there was no whistle for either.

"We knew there was a disruption," Auburn coach Bruce Pearl said.

With 1.5 seconds left and in need of some magic, Virginia got the ball to Guy in the corner. He turned and fired and Samir Doughty, hands straight up in the air, bumped into Guy's hip. The shot was short, bouncing off the rim. Game over? Auburn started to celebrate and the PA announcer in U.S. Bank Stadium even announced the Tigers had won.

Guy pulled his jersey over his face. But not in angst. He said he exactly knew why official James Breeding had blown his whistle.

"I heard him call it right away," Guy said. "That was me focusing."

Meanwhile, Pearl lost it on the sideline, pumping his fist and screaming.

"We kind of thought we had it sealed," said Bryce Brown, who led the Auburn comeback with three 3s in the final 4:30. "It's not why we lost the game. I just didn't agree with the call."

Pearl said he didn't want the final call to define a great game, but he did say the officials seemed to be letting physical play go throughout.

Guy swished the first two free throws to tie it and Auburn called a timeout to ice him. Didn't work. He hit one more for the lead.

"I just literally told myself that we dream of these moments, and to be able to make one happen was special," Guy said.

Auburn threw a long inbound pass to Brown, but his desperation 3 was short.

The Cavaliers mobbed Guy on one end. Brown sat on the court, head hanging on the other. Auburn, in the Final Four for the first time, had its 12-game winning streak and season end in a most painful way.

The foul violated the rule that "verticality applies to a legal position and also to both the offensive and defensive players," Collins said. "The defender may not 'belly up' or use the lower part of the body or arms to cause contact outside his vertical plane or inside the opponent's vertical plane."

Jerome scored 21 points for Virginia and De'Andre Hunter had 10 of his 14 in a stellar second half.

Doughty led Auburn with 13 points and Brown had 12 for Auburn, which survived the first round against New Mexico State when Terrell Brown of the Aggies missed two of three free throws with 1.1 seconds remaining in the Tigers' 78-77 victory.

Auburn wasn't so fortunate this time, and Virginia, the team that made UMBC a household name — at least for a little while — in the first round of last year's tournament would not be denied. Being on the receiving end of maybe the most humbling NCAA Tournament upset ever has been Virginia's cross to bear all season. Even after beating Auburn, the Cavaliers had to recall the feeling of their offseason routine starting unexpectedly early last year.

Then Guy said: "Not much to add. Just you guys can ask that question again on Monday."