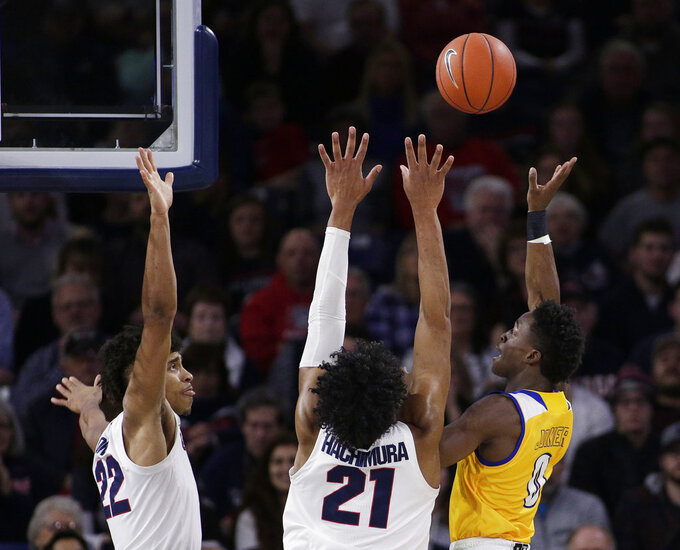 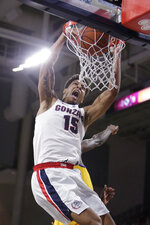 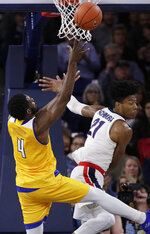 SPOKANE, Wash. (AP) — Seventh-ranked Gonzaga has wrapped up an eventful non-conference season that saw the Zags reach No. 1 in the Top 25, and then fall down a few spots after a pair of losses.

Rui Hachimura scored 22 points as Gonzaga beat Cal State-Bakersfield 89-54 on Monday night to wrap up the non-conference season for both teams.

Brandon Clarke and Zach Norvell Jr. each scored 16 points for Gonzaga (13-2), which has easily won four straight games after losing to No. 3 Tennessee and No. 15 North Carolina. Jeremy Jones had 11 points and 10 rebounds.

"They did a great job," Gonzaga coach Mark Few said of the non-conference season. "The way those games were stacked up was as tough as anything we've done."

"They've done fantastic in lieu of the injuries we had," Few added, referring to the loss of forward Killian Tillie and guard Geno Crandall. Both are expected back for the conference season.

"They are a tough, hard-nosed team that plays everybody tough," Few said. "It's hard to get separation on them."

Gonzaga blew out its past three opponents in the first half, but this game started as a defensive battle. The Roadrunners used a pressure defense and methodical offense to slow one of the nation's top offenses.

Gonzaga went on an 11-0 run while holding the Roadrunners scoreless for 6 minutes to take an early 13-6 lead.

A 13-0 run a few minutes later put Gonzaga up 28-12. The Zags led 43-24 at halftime, behind 13 points by Hachimura. Joiner scored the last 10 points of the half for Cal State Bakersfield.

The teams traded baskets early in the second half, and Joiner's 3-pointer cut Gonzaga's lead to 55-35.

"I was proud of our guys in the first half," Bakersfield coach Rod Barnes said. "We took the game to them."

"In the second half we gave in," Barnes said. "We'll take this as a good butt-whipping and get home and fix the problems."

Hachimura had several family members visiting from Japan in recent days, including his mother. He sank 7 of 10 shots, grabbed four rebounds and blocked a shot Monday. "I really wanted them to come," Hachimura said. "I have to play good."

The Roadrunners made just 22 of 60 shots, including 3 of 19 from 3-point range. They also committed 20 turnovers and got to the free throw line just 10 times.

Four big wins over outmanned opponents in the past two weeks doesn't hurt.

Cal State Bakersfield: The Roadrunners have been holding opponents to 68 points per game ... Coach Rod Barnes was WAC coach of the year in 2016 and 2017 ... The Roadrunners lost by five points to then-No. 20 TCU earlier this season.

Gonzaga: The Bulldogs outscored their previous two opponents by a combined 64-7 through the first 10 minutes of those games, but no such luck this time ... Gonzaga came in averaging 94 points per game ... The Zags lead the nation in field goal shooting at 53 percent.

Gonzaga opens defense of its West Coast Conference title against Santa Clara on Saturday. The Zags are projected to win the league regular season title for the seventh consecutive year.