Hall's Powell has no regrets despite no NCAA Tournament 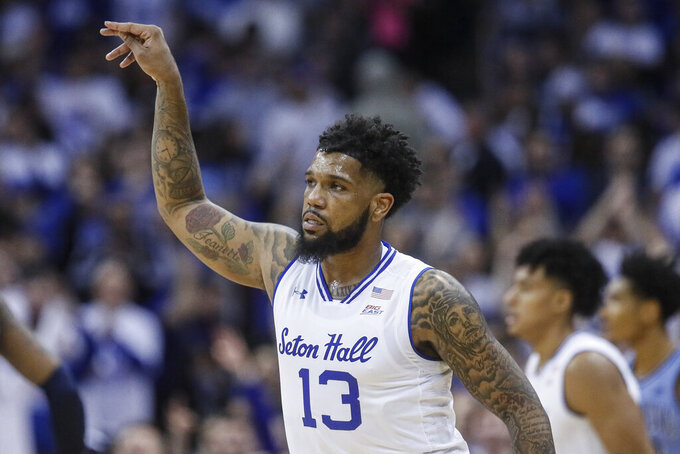 Preseason All-American Myles Powell has no regrets about returning for his senior season at No. 16 Seton Hall despite the Big East and NCAA tournaments being canceled because of the spread of the new coronavirus.

Even without making a run at any titles, Myles said Monday that winning the Big East's player of the year award, having the Pirates share the regular-season crown and deepening his bonds with teammates met all his expectations.

“My head is up high,” said Powell, who decided to return so he could become the first member of his family to earn a college degree. “We had a great season. I am just trying to keep my head up high.”

Powell averaged 21 points a game, the second-most in the league and 17th best in the country, to help the Pirates earn a share of the program's first regular-season championship since 1993. The guard from Trenton, New Jersey, was at his best on the road, averaging 25.8 points in leading the Pirates (21-9) to a 7-2 mark in Big East play.

Seton Hall never spent a day out of first place throughout the league season, finishing tied with No. 7 Creighton and No. 11 Villanova.

Even after the Big East canceled its postseason tournament at halftime of a quarterfinal at Madison Square Garden between Creighton and St. John's, Powell still believed there would be an NCAA Tournament.

That hope ended hours later when the team returned to campus and assistant coach Grant Billmeier gave him a hug, saying: “Thanks for everything.”

“That's when my heart started to get heavy and I realized that it might be all over,” Powell told reporters on a conference call Monday.

He said he has not thought much about the future. He wants to play in the NBA. Some coaches and athletic directors are urging the NCAA to give seniors another year of eligibility, which it has said it plans to do with spring-sport athletes.

“I don’t how much more I could accomplish if I came back to Seton Hall,” Powell said. “If I sat down with a couple of guys from the NBA and the GMs and they told me that another year in college would help me and make me a better player, I would do that.”

For now, Powell is just trying to stay in shape and be cautious during the pandemic.

He and his teammates went to coach Kevin Willard's house for lunch on Sunday to celebrate the season. They ordered from one of their favorite restaurants, getting fried chicken, mac and cheese, yams and steaks. They had their conference championship trophy and wore their March Madness shirts, which they had made for Selection Sunday, the day the NCAA Tournament’s 68 teams are announced.

“Just to get another day in the same room, full of smiles and everyone in good spirits, that really helped a lot," Powell said. “That championship trophy, it just reminded us of what we accomplished this year.”

Powell thinks Seton Hall had a chance to make a run in the NCAA Tournament. Many experts predicted the Pirates would have been a No. 3 seed in their region.

“All year people were saying we were a Final Four team," Powell said. “I think we would have lived up to it.”

“It's definitely something you have to be cautious of and pay attention to,” he said. “The only thing you can do is just pray.”