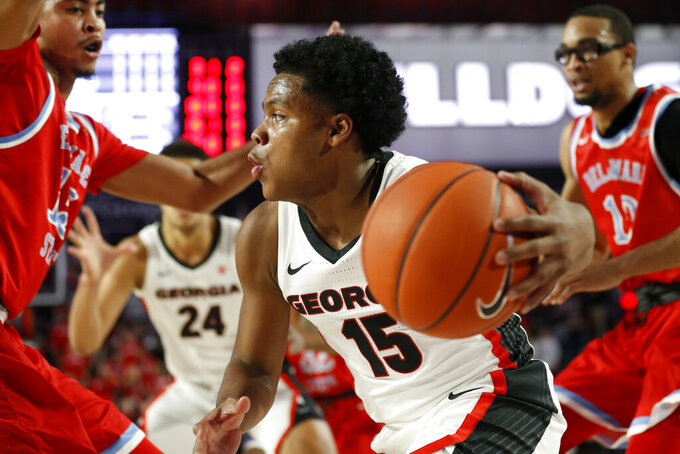 Hammonds took the words to heart and upped his game.

“Even when he gets on me, I like it because it pushes me,” Hammonds said. “My teammates started getting on me and we push each other, so that is just the main focus in practice. I challenge them, and they challenge me.”

Anthony Edwards, one of the nation’s top freshmen, finished with six points and seven assists in 25 minutes. The star guard sat out much of the second half with Georgia (3-0) leading by big margins.

“He’s a very, very good passer,” Crean said. “He’s a very good distributor. Seven assists, nine deflections. He did a lot of good things there. We tried to move him around. He’s learning to read the game the whole time. He guarded. He put a lot in his defense tonight.”

Hammonds, the Bulldogs’ leading scorer and rebounder last season, went 11 for 14 from the field. It was his third career double-double.

John Crosby scored 22 points for Delaware State (0-3). The Hornets had nobody able to match up underneath against Hammonds and Ngumezi, both of whom are 6-foot-9, 235 pounds.

The Bulldogs led by 20 at halftime on 56 percent shooting from the field. Hammonds had 11 of Georgia’s first 16 points, went 7 for 9 from the field before intermission and hit jumpers on consecutive possessions to make it 33-19.

Edwards was next up, stealing the ball from Ronald Lucas on Delaware State’s end and driving for a dunk that brought a big smile to his face. He missed the ensuing free throw, but Hammonds tipped in Edwards’ missed jumper to put Georgia up 16. Toumani Camara provided a highlight with a no-look pass from the right baseline to Rodney Howard for a dunk that made it 18-4.

Some of the better moments of the second half included Christian Brown stealing the ball from John Stansbury and passing up the court to Tyree Crump, who turned to feed Brown for a fastbreak layup and a 69-42 lead. Hammonds’ fastbreak dunk, a left-handed jam, put the Bulldogs up 86-56 with 5:59 remaining.

“We had a hard time and struggled to get started,” Delaware State coach Eric Skeeters said. “It took us a little while to get going. We were depleted in size, and it showed tonight in rebound advantage. They had 16 offensive rebounds, so size makes a difference.”

Delaware State: Though they lacked the talent and depth to keep the score close, the Hornets had a few early bright spots. After missing 10 of its first 12 shots, Delaware State got two straight 3s from Myles Carter and soon after Crosby stole the ball and fed Crosby for a fastbreak jumper that cut the lead to 23-15. John Stansbury, the team’s leading scorer in the first two games with an average of 13 points, didn’t take a shot in the first half and didn’t score until there were 10 minutes remaining. He finished with five points.

Georgia: The 3 was a missing ingredient in the first two games as the Bulldogs shot just 27 percent beyond the arc against Western Carolina and The Citadel. They were 38 percent against Delaware State with Crump going 3 for 8. Georgia dominated near the basket, outscoring Delaware State 36-8 in the paint at the 14:24 mark and finishing with 30 assists, their highest total since 2006. The Bulldogs committed only 11 turnovers. They began the night with the nation’s 29th-best turnover percentage.

Georgia announced a crowd of 8,167 with most of the lower bowl full at Stegeman Coliseum. Bulldog fans have been notorious since the program’s inception for staying away, but Crean overcame last year’s 11-21 finish in his first season at Georgia to sign a highly ranked recruiting class and help the team begin the season with its season-ticket allotment sold out. Stegeman has a capacity of 10,523.

Georgia: Hosts Georgia Tech on Wednesday and faces Dayton in the Maui Invitational on Nov. 25.