Harbaugh says he's staying at Michigan, not returning to NFL 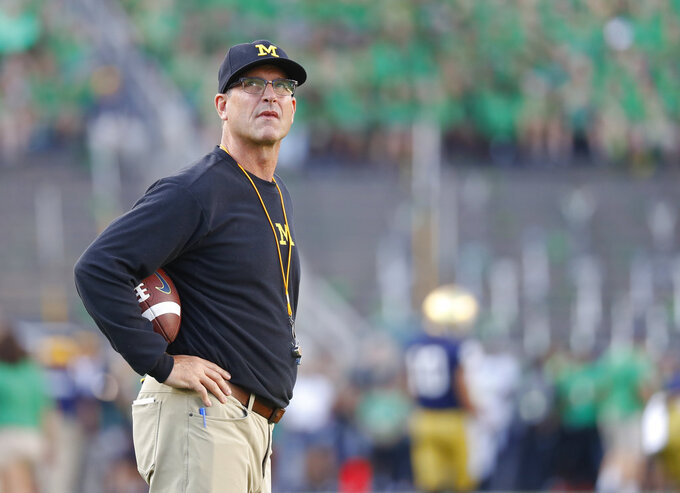 ANN ARBOR, Mich. (AP) — Jim Harbaugh insisted he is staying at Michigan to coach, responding to speculation he is returning to the NFL.

The former San Francisco 49ers coach told ESPN he is not going anywhere .

"This is a choreographed message that comes up at this time every year before signing day," Harbaugh told ESPN. "It's people spreading messages to further their own personal agenda. But I'm on record right here, right now: I'm not going anywhere. I'm staying at Michigan. We have big plans here, and there's a lot we want to accomplish."

Harbaugh and the eighth-ranked Wolverines were celebrated Sunday at a banquet. He was scheduled to have a news conference following the event.

Michigan won 10 games this season for the third time under Harbaugh but dropped to 0-4 against the rival Buckeyes and fell out of the Big Ten and national championship races. The Wolverines face No. 10 Florida on Dec. 29 in the Peach Bowl.

Harbaugh, who is 38-13 at Michigan, is in the fourth year of a seven-year contract with a compensation package that gives him more than $7 million per year. He returned nearly four years ago to the school where he was a star quarterback after going 44-19-1 with the 49ers, winning the 2012 NFC championship.