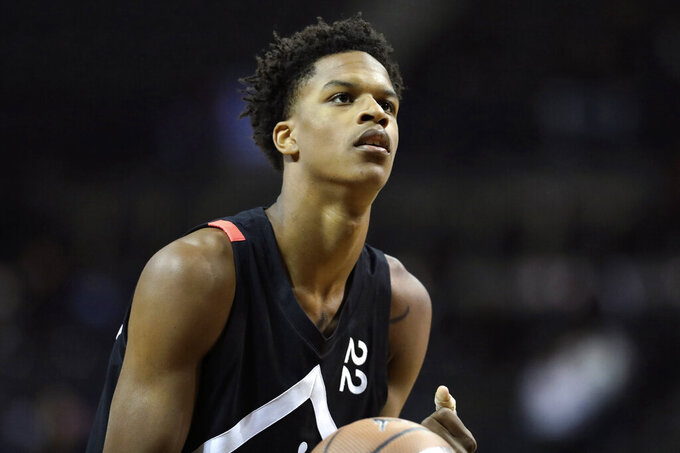 LOS ANGELES (AP) — Mick Cronin's task at UCLA is daunting. Rebuild a tradition-laden program that hasn't been a national powerhouse in recent years while overcoming skeptics.

He got the job 100 days after Steve Alford was fired on Dec. 31. Before moving on to Nevada, Alford left behind enough talent and a couple of recruits that give Cronin the size, athleticism and depth to be competitive. Whether the Bruins buy into Cronin's defense-oriented scheme remains to be seen.

Cronin landed in Westwood from Cincinnati, where he compiled a 296-146 record over 13 seasons that included nine straight NCAA Tournament appearances but just one Sweet 16 berth. His 365 career victories entering UCLA are the most for a new Pac-12 coach since Alford came in with 385 before taking the Bruins to three Sweet 16s in his first four years.

"You get a chance to sit in the chair that John Wooden once sat in, and it's an unbelievable opportunity," Cronin said. "Our tradition and our history, former Bruin players, are second to none."

Still, these Bruins have been picked to finish eighth in the Pac-12 for the first time.

Their three leading scorers from last season are gone, but they return their other 10 players, led by seniors Prince Ali and Alex Olesinski.

"Our depth could be our strength," Cronin said.

They have a potential star in guard Tyger Campbell, who was forced to redshirt his freshman season because of an ACL tear. He's wearing a brace, but otherwise is going full bore.

The hard-nosed Cronin brings a top-50 defensive efficiency to a UCLA program that has accomplished that feat only twice in the last 10 years. He's made it clear to his team that if they want to play, they have to defend. "My biggest recruiting job has been our current players," Cronin said. "They're not used to the way we do things or how we do things, let alone the way I deliver my message."

Recruits Jaime Jaquez Jr. and Jake Kyman — both from Los Angeles-area schools — stuck around through the coaching transition. Jaquez is capable of providing rebounding and tough defense but can still produce offensively. Kyman can shoot from 3-point range. Cronin actually recruited Jaquez when he was at Cincinnati. "We've got some guys that I think are going to impress you when we get them up to speed on what it takes to play at this level," Cronin said.

There's plenty of possibilities for who steps up to replace 7-foot-1 Moses Brown in the paint. Among them are Jalen Hill and Cody Riley, who were both suspended as freshmen for shoplifting during a preseason trip to China. Hill made 15 starts last season, while Riley averaged 5.5 points while averaging 17.4 minutes. At 6-10, Olesinski has the size to play down low as does 6-9 sophomore Kenneth Nwuba.

Shareef O'Neal, the son of retired Lakers great Shaquille O'Neal, returns after undergoing heart surgery that caused him to redshirt his freshman season. He's still in the process of overcoming the physical and mental setbacks from his health scare. The 6-9 forward potentially could be a force in the post. "I've got to probably get him to play a little meaner," Cronin said. "He's too nice of a guy at times."

Cronin's penchant for defense and a lower-tempo style are unlikely to sell by themselves in Westwood, where expectations are always high and flashy play is prized. But winning could change things, something he noted at his introduction when he said, "Here's how I spell fun: W-I-N." An NCAA Tournament run would be unexpected but returning to fundamentals and solid results in Pac-12 play could bring back enthusiasm among the Bruin faithful.

The Bruins play their first five games at Pauley Pavilion. They head to the Maui Invitational for three games starting Nov. 25. The rest of their nonconference schedule is highlighted by a visit to Notre Dame on Dec. 14 and playing North Carolina on Dec. 21 in Las Vegas.