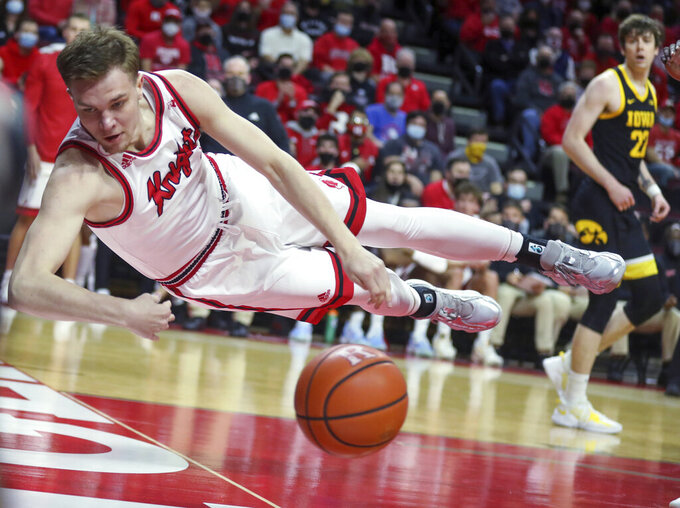 Rutgers forward Oskar Palmquist (1) makes a diving attempt to keep the ball in bounds during the first half of the team's NCAA college basketball game against Iowa on Wednesday, Jan. 19, 2022, in Piscataway, N.J. (Andrew Mills/NJ Advance Media via AP)

Harper was fouled by Keegan Murray as he tried to find a way through the Hawkeyes' perimeter defense. After his free throws and a timeout, Connor McCaffery threw a long inbounds pass to Murray, who made the catch in a crowd but had his 3-point try fall short.

Harper was 5-of-10 shooting, but no other Rutgers player reached double-figure scoring. Clifford Omoruyi grabbed 14 rebounds.

Murray finished with 13 points but on 5-of-14 shooting and had 13 rebounds. Patrick McCaffery was 4 of 12 from the floor for 11 points. Filip Rebraca had 10 rebounds with eight points.

On a night when offenses struggled and defenses excelled, Iowa scored a season-low total while the Scarlet Knights tied their low. The Hawkeyes, the Big Ten's highest-scoring team coming in at over 86 points per game, shot just 28% to Rutgers' 31% with the teams' combining to make only 35 of 119 attempts.

At one point in the second half when it scored just 19 points, Iowa went over 9 1/2 minutes without a field goal, going 0 of 10, though Rutgers was just 1 of 14 over the same span.

Rutgers committed 15 turnovers, but Iowa turned those into only six points. There were 15 blocks, 10 by Rutgers — three apiece by Omoruyi and Geo Baker — and a combined 15 steals.

A pair of free throws by Iowa's Joe Toussaint broke a tie and McCaffery added another with 26 seconds remaining for a 27-24 halftime lead.

Iowa is host to Penn State and Rutgers is at Minnesota on Saturday.