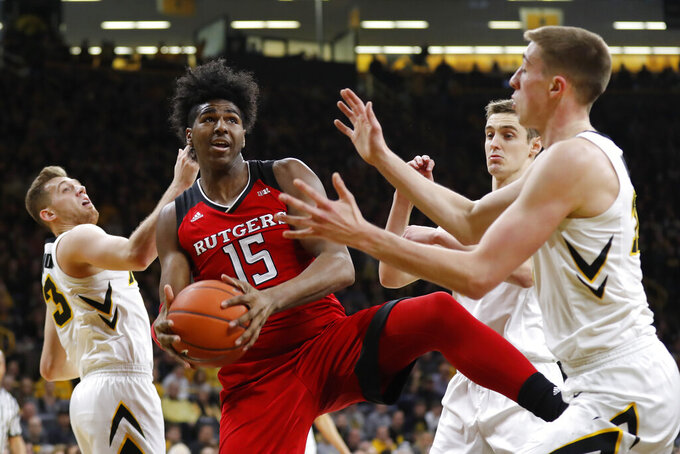 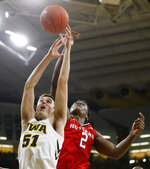 But it's fair to start wondering if the Hawkeyes will be able to do anything once they get there.

Freshman Ron Harper Jr. scored a season-high 27 points and Rutgers rolled past Iowa 86-72 on Saturday in the Hawkeyes' home finale.

"We got it rolling a little bit," Rutgers coach Steve Pikiell said. "It's hard to win on the road, and it's the best league in the country."

Iowa played without coach Fran McCaffery, who was suspended by the school for two games for yelling at an official in a hallway heading to the locker room following Tuesday's loss at Ohio State.

It was Iowa's third loss in four games — and the Hawkeyes (21-8, 10-8) needed some late heroics to top Indiana in their only win in that stretch.

The scariest thing for the Hawkeyes was how lopsided it was. Iowa shot just 35.7 percent from the floor and turned it over 13 times.

"It didn't seem like we able to get into any sort of offensive rhythm," acting Iowa coach Andrew Francis said. "We haven't shot the ball collectively as well as we know we're capable of."

Rutgers jumped all over the Hawkeyes in the first half, hitting seven 3s — including 3 straight from Thiam from the same corner — to jump ahead 39-30. The Scarlet Knights then went on an 8-2 run straight out of the locker room to make it 47-32.

Iowa, the national leader in free throws made entering play, got into the bonus with 13:21 left. But the Scarlet Knights kept getting open looks from beyond the arc from a generous Iowa defense, with Harper and Geo Baker hitting back-to-back 3s to help push the lead to 65-45.

"He's getting better and better," Pikiell said of Harper. "I think he's going to be a really good player, and we got a little dose of that.""

"We're going through a small rough patch, I guess. Even in our wins we haven't been playing our greatest ball," Cook said. "But the fun part about it is finding a way to get better."

Iowa: It's impossible to say whether McCaffery's absence hurt the Hawkeyes. But he's the coach for a reason. Iowa came out lethargic in front of a sellout crowd on Senior Day, and failed to make the halftime adjustments needed to at least make a game of it. "We don't want to lose our confidence in who we are," Francis said. "I think this team is still in a good place...we're just missing some shots."

Rutgers: The Scarlet Knights, who lost at Fordham and needed overtime to beat Columbia in December, are one of the most improved teams in America — and they got revenge for losing to Iowa on a buzzer beater two weeks ago. They might win a game or two at the Big Ten tournament.

Bohannon had 15 points, but he was just 4 of 12 shooting. Bohannon is streaky, and that could be an issue in the Big Ten and NCAA Tournaments. ...Rutgers was 11 of 23 on 3, with Harper leading the way at a 4 of 7 from deep. ...Sophomore big man Luka Garza has had a strong season for Iowa, but he wasn't at his best against the Scarlet Knights. The Hawkeyes were minus-24 with Garza on the floor. Garza had 10 points but just two rebounds.

"Of course we want coach (McCaffery) out there with us. He's the main voice that we hear every day," Cook said. But "even when he's with us he's not out there playing ball. So, we've got to go out there and execute."

Iowa will almost certainly drop out of Monday's poll.

Iowa: At Wisconsin on Thursday night.