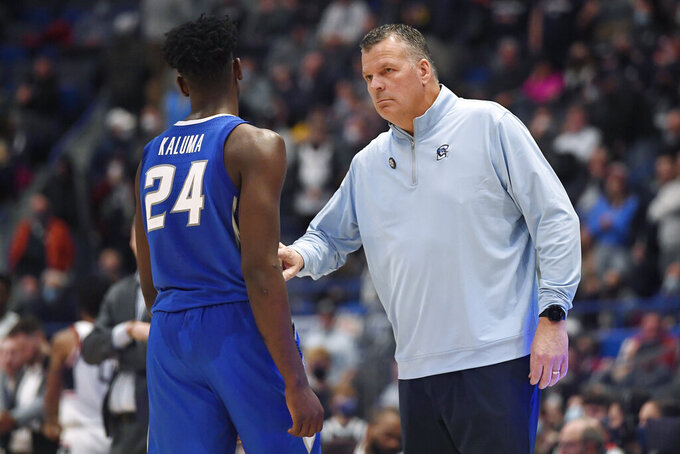 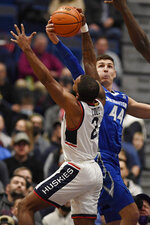 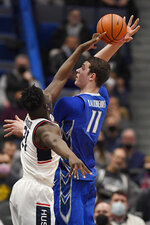 Ryan Hawkins scored 23 points and the Bluejays bounced back from that loss to No. 21 Xavier with a 59-55 upset of No. 17 UConn on Tuesday night.

“We talked at halftime about this second half is going to be about the people who don't believe we can finish something,” McDermott said.

Isaiah Whaley had a career-high 20-points for UConn (15-5, 6-3), which had won five in a row and was looking for its first six-game win streak since the NCAA Tournament run in 2014 that brought the Huskies their fourth national title.

Creighton led by 10 points at halftime and scored the first bucket of the second half.

But the Huskies then used a 15-3 run to erase that deficit. A 3-pointer from Whaley tied the game at 37 and a turnaround shot in the lane from Adama Sanago gave the Huskies their first lead since 2-0 at 41-39.

That's when Creighton took its defense to another level. The Bluejays held UConn without a field goal for over 7 minutes after Whaley’s 3-pointer tied the game at 46 with 7:15 left.

Andre Jackson's 3-pointer with 5 seconds remaining brought the Huskies to within two at 57-55, but Trey Alexander hit two free throws with 2.5 seconds left to seal it.

“We said, 'whatever happens offensively, who cares, defensively we can control what we do,” Hawkins said. “And I felt like we did a great job against a really experienced and a really good UConn team down the stretch of the game.”

Hawkins had the first five Creighton points and the Bluejays jumped out to an early 19-11 lead.

Whaley hit four of his first five shots while the rest of the Huskies were going 0-10.

“They were giving us jump shots, but we just wasn't making them,” Whaley said. “That kind of messed up a lot of people's rhythm so when it came to super-easy shots, like just making layups, people's confidence was just messed up from missing a lot of jump shots.”

A step-back 3-pointer from Arthur Kaluma gave Creighton its first 10-point lead at 25-15, and a 3-pointer from Hawkins that bounced high off the back of the rim and back through the net, sent the Bluejays into the half up 32-22.

“I kind of got lucky with one,” Hawkins said. “But it kind of got me going a little bit offensively. Before half, a lot of wild stuff happens. I'm just thankful it went in.

Creighton: With the win, Creighton improves to 3-4 this season against ranked opponents. The Bluejays also beat then No. 9 Villanova, 79-59, and then-No. 21 BYU 83-71. ... The Bluejays improved to 4-0 against UConn, the first three, including a Big East tournament victory, came last season.

UConn: The game was the first of nine Big East games in 26 days for the Huskies, five of which will come against teams currently in the Top 25, including two each against No. 12 Villanova and No. 21 Xavier.

Creighton's 7-foot-1 center Ryan Kalkbrenner, who came in averaging 12 points and seven rebounds a game, went down under the Blue Jay’s basket early in the second half after rolling an ankle. He finished with six rebound, including four offensive boards, four points and a blocked shot. McDerrmott said he hopes to have his big sophomore back Friday.

McDermott on losing games in the Big East:

“I just think in this league, I think every fan base wants to hit the panic button when you lose a game or two. This league is hard. We have five teams in the Top 25 and a couple more like us that feel like if we can finish we can make the NCAA Tournament. It's a hard, hard league.”

UConn: The Huskies travel to Philadelphia on Saturday to take on No. 12 Villanova.