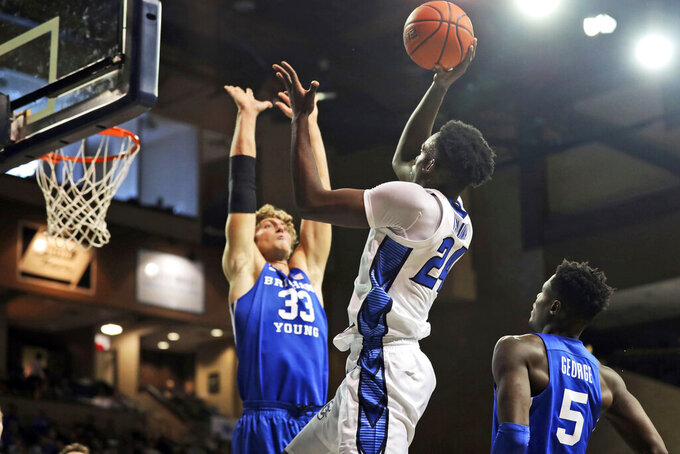 SIOUX FALLS, S.D. (AP) — Far from the Creighton campus, the 3,500-seat Sanford Pentagon was nearly packed with Bluejays fans and Ryan Hawkins gave them quite a show against No. 24 BYU on Saturday.

Even though eight inches of snow fell Friday in Sioux Falls and hampered travel, the Creighton crowd made it seem like a home game 180 miles to the north. The stands were full as Hawkins scored 19 of his season-high 25 points in the first half in an 83-71 win.

Creighton (9-2) built its lead to as many as 20 before the break, helped by Hawkins’ four 3-pointers.

“I took a couple I probably shouldn’t have, but I was having fun,” Hawkins said. “I just kind of let it come.”

Hawkins finished 10 for 18 from the field, including 4 for 8 on 3s, and had eight rebounds.

“44 (Hawkins) was just a handful for us tonight in the first half. We couldn’t find any answers,” BYU coach Mark Pope said. “He’s a big-time shooter, and he’s got great range and he gets it up quick. Our guys were surprised early on with how mobile he was and how quick he was to get shots off. That’s a learning process. It was a good education for us tonight.”

Alex Barcello scored 28 points for BYU (8-2), shooting 5 of 7 on 3-pointers. Gideon George played 20 minutes off the bench and led the Cougars with 11 rebounds.

Down by 21 points in the second half, the Cougars closed within 10 with just under nine minutes remaining when Seneca Knight hit one of his three 3-pointers.

The Bluejays pulled away after that.

“Our guys are getting better. That’s the reality of it,” Creighton head coach Greg McDermott said. “They’re going to grow with each experience. Every game is a lesson and there’s a lot we can learn from this game.”

BYU: The loss was the Cougars’ first by double digits in the regular season since an 82-71 setback to No. 1 Gonzaga last season. The loss likely will knock the Cougars out of the Top 25.

Creighton: The Bluejays beat a ranked team for the first time time since topping No. 5 Villanova 86-70 last season. The Bluejays had lost three straight to ranked opponents.

After opening the season ranked No. 18 and climbing as high as No. 12 this season, BYU could fall out.

Creighton could creep into the Top 25 poll with the win. The Bluejays were ranked No. 19 in the final poll last season.

With just over five minutes to play and Creighton leading 68-54, Hawkins grabbed a long rebound and had a clear path to the basket. With a defender closing, he delivered an emphatic dunk to the roar of the crowd.

“I hope the fans got into that,” he said. “Because that’s about all they’ll get this year. I hope they remember it well, because it probably won’t happen again.”

BYU is at Weber State next Saturday before heading to Honolulu for the Hawaiian Airlines Diamond Head Classic Dec. 22-25.

Creighton returns home for games next week against Arizona State on Tuesday and then Villanova in the Big East opener on Friday.