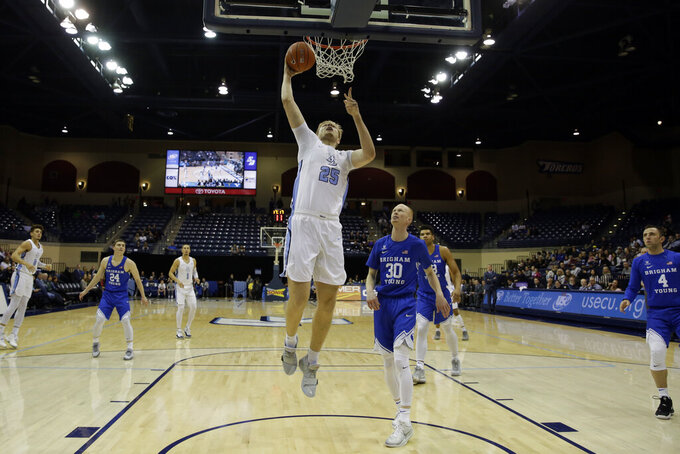 SAN DIEGO (AP) — TJ Haws and the BYU Cougars weren't about to lose in overtime again.

Haws, a junior guard, scored eight of his career-high 35 points in overtime while Yoeli Childs had five of his 27 in the extra period to lead BYU to an 88-82 victory against San Diego on Thursday night, the fourth straight victory for the West Coast Conference's second-place team.

San Diego twice pulled within two points but Haws had a layup and then sealed it with four free throws in the final 27.4 seconds.

Haws' previous career-high was 34 against Pepperdine on Jan. 17.

"That's great. It's fun to be on that list with my family," Haws said. "Ultimately it feels good because we got the win. It hurts when you don't win for sure, no matter what you do."

"We've been in overtime a few times this year and I felt like that was great preparation for us," Haws said. "Really, we just said we're going to guard, guard, guard. After that first little bit at the start of the game, we really got after it defensively and that set the tone."

The Cougars also trailed by 14 just eight minutes into the game.

"That was huge for us," Childs said. "Just the resolve we had was unbelievable. I think we've just improved so much. We looked at ourselves and said, 'We've been here before.' We took two overtime losses in preseason and knew what we had to do to get it done. Guys stepped up and made big shots."

USD had its second 14-point lead of the game, 53-39, four minutes into the second half, before BYU went on a 20-7 run to close to 60-59. The Cougars got 3-pointers from Cannon and Zac Seljaas, and three free throws by Haws after he was fouled by Pineiro while taking a shot from behind the arc.

USD was coming off a disappointing loss at Pepperdine in which they blew a three-point lead in the final seconds.

"They're all difficult. We've got to learn," coach Sam Scholl said.

Once the Toreros got up 14, "We got complacent," Scholl said. "We got stagnant on defense and they hit a couple of 3s and then we just didn't get to shooters."

San Diego: Carter made four 3-pointers in the first eight minutes to help the Toreros to a 24-10 lead.

BYU is at Loyola Marymount on Saturday. The Cougars beat the Lions 67-49 in Provo on Feb. 2.

San Diego hosts No. 3 Gonzaga on Saturday night. The Zags beat the Toreros 85-69 in Spokane on Feb. 2.