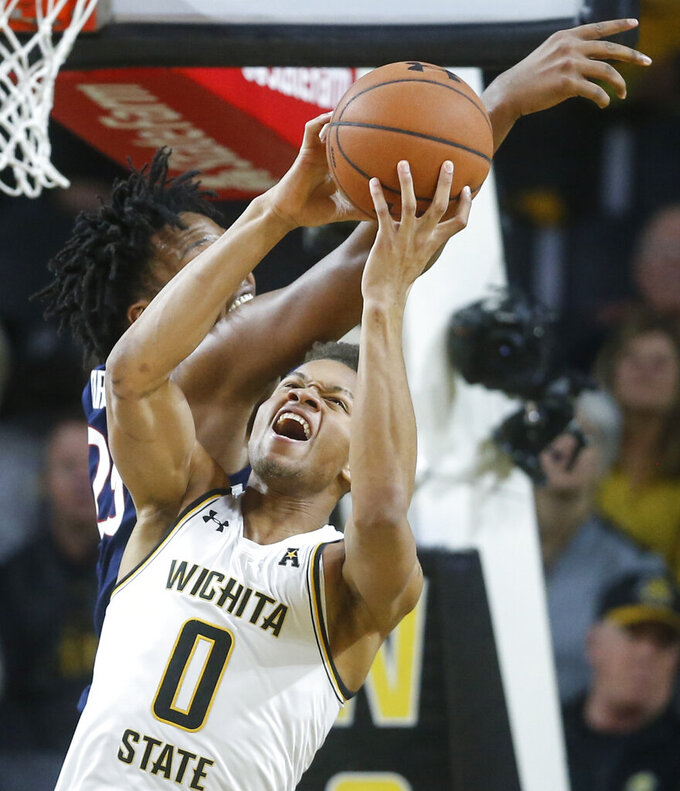 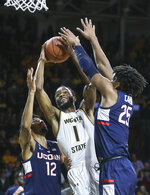 UConn's Alterique Gilbert scored on back-to-back 3-pointers inside the final minute that tied the game at 63. Haynes-Jones took an inbounds pass with 6.4 seconds to go, dribbled the floor and sealed it with an off-balance shot from the corner.

"I've shot that shot a lot in my life," Haynes-Jones said. "I was relaxed and knocked it down. I knew it was going in."

Wichita State (14-13, 7-8 American Athletic Conference) rebounded from an 88-85 loss against Memphis on Saturday and has won two of its last three games. Coach Gregg Marshall also picked up his 300th career win with the Shockers.

Haynes-Jones was 7 of 16 from the floor and made four 3-pointers. Asbjorn Midtgaard had four blocks in the second half to halt UConn's comeback and sent the Huskies (13-15, 4-11) home with their sixth straight loss.

Markis McDuffie scored 13 of his 19 points for the Shockers in the second half. Jamarius Burton added 11 points.

Gilbert scored 18 points and Josh Carlton added 10 for UConn. Gilbert had 13 points in the second half.

"We weren't as locked in as we needed to be," UConn coach Dan Hurley said. "We had some moments . just not enough to win against anyone in this league on the road. That was a sad defensive game."

Wichita State let a seven-point, first-half lead slip and trailed 37-27 early in the second. The Shockers didn't regain the lead until the 10-minute mark of the second half.

The Shockers improved from 24 percent shooting in the first half to shoot 42 percent from the field in the second.

UConn: Lost its sixth consecutive game without point guard Jalen Adams, who is expected to miss two or three more weeks with a knee sprain.

Wichita State: Has won six of its last eight games and improves to 7-8 in the American Conference after starting 1-6.

Haynes-Jones scored the buzzer against SMU on Jan. 30. "It's been up and down," Marshall said, "but, by and large, where would we be without him?"

"I feel like that shot was the tip of the iceberg on how blessed I have been as a coach," Marshall said. "I'll definitely remember No. 300 at Wichita State."

Wichita State: The Shockers play at Southern Methodist on Sunday.