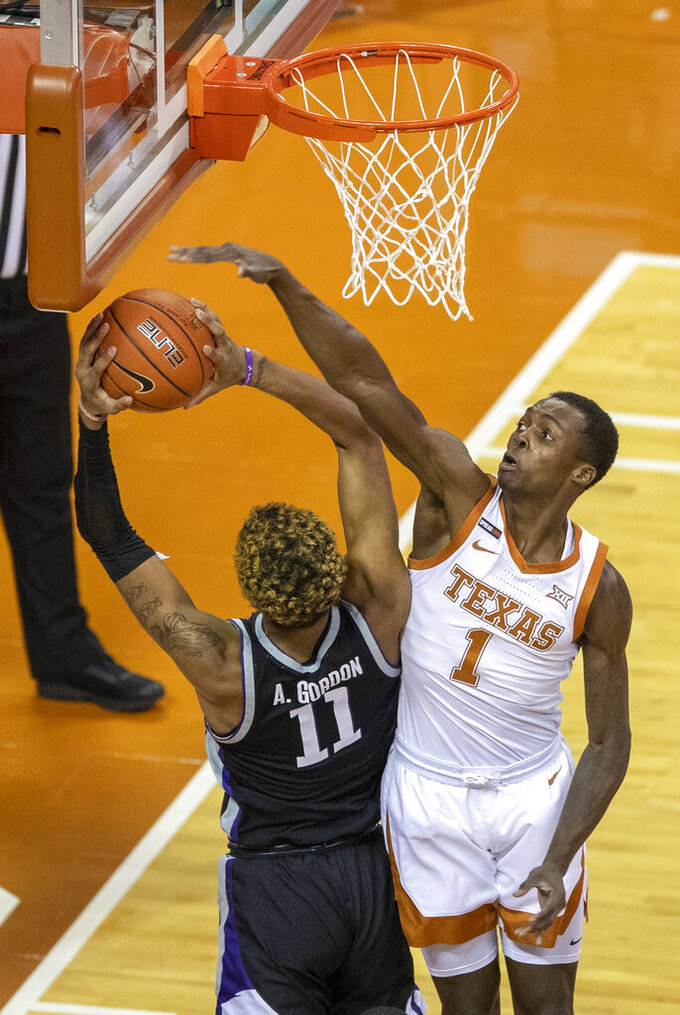 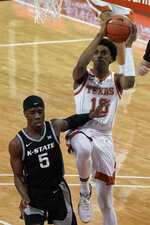 AUSTIN, Texas (AP) — A depleted roster forced Texas deep into its bench for seldom-used Kamaka Hepa, whose biggest moments this season have been as the Longhorns’ biggest cheerleader on the sideline.

Given his chance, Hepa delivered the big shots on the court Saturday night, scoring 15 points as the No. 4 Longhorns rebounded from their first Big 12 loss of the season by beating Kansas State 82-67.

Hepa, who had played in only three games, started in place of freshman forward Greg Brown, who was one of three Longhorns (11-2, 5-1) held out for reasons not immediately disclosed. Hepa made five of Texas’ 12 3-pointers in the blowout.

“I ultimately want our team to succeed and when our team succeeds, I succeed,” Hepa said. “There’s no reason to pout about not playing ... not making shots. Whatever the case may be, it’s that underlying love I have for my coaches, and that I have for my teammates.”

With the emergence of Brown, one of the top freshmen in the country, Hepa initially planned to redshirt this season.

“Then the NCAA just said this would be a free year for everybody,” Hepa said.

The Longhorns broke the game open with an 18-0 run midway through the first half keyed by a burst of 3-pointers and a defensive press that rattled the Wildcats. Andrew Jones made three 3-pointers in the half and the Longhorns turned six early Kansas State turnovers into 14 points to quickly pull away.

Hepa made two early 3-pointers, then swished two more from the left wing in the opening minutes of the second half to snuff out any hopes of a Wildcats rally. Febres, who hadn’t played since knee surgery last March, finished with six points.

“That’s the way a team is supposed to be,” Texas coach Shaka Smart said. “We knew with those three guys out, we’d need contributions from guys who haven’t played much ... The more guys you have with a passion for each other, the more success you’re going to have.”

Both teams had depleted rosters.

Kansas State had to postpone a game earlier in the week because it didn’t have six health scholarship players due to COVID and injury problems, and had only nine available Saturday night. Texas was missing Brown, who is averaging 11.8 points, and top reserves Kai Jones and Brock Cunningham, forcing the Longhorns to go deep into their bench for Hepa and shooting guard Jase Febres.

Smart said Brown, Kai Jones and Cunningham would not play in the next scheduled game against Iowa State on Wednesday. The status of that game is uncertain as Iowa State had its Saturday matchup with Kansas postponed because of COVID-19 problems within the Cyclones program.

“Losing isn’t a habit. Losing has never been a habit,” Bradford said. “We’re going to get there one day. We’ll keep fighting."

Kansas State: The Wildcats were smothered early on offense and never recovered in dropping their fourth straight loss.. The turnovers forced by Texas’ press led to easy Longhorns baskets and the half-court offense was too often caught deep in the shot clock.

Texas: The Longhorns have found a dead-eye shooting touch from long range. In the last three games, Jones hit the game-winning 3-pointer in the final seconds against West Virginia, the Longhorns made 13 3-pointers in a loss to Texas Tech and kept launching wide open shots against the Wildcats.

Texas led 61-36 when Jericho Sims led a fast break with an quick outlet pass to Courtney Ramey, who floated a soft lob off the backboard and right back to the trailing Sims for a flying, two-handed dunk. Sims and Ramey each scored 14 points.