Hoiberg's plans for Cornhuskers no longer include Doc Sadler 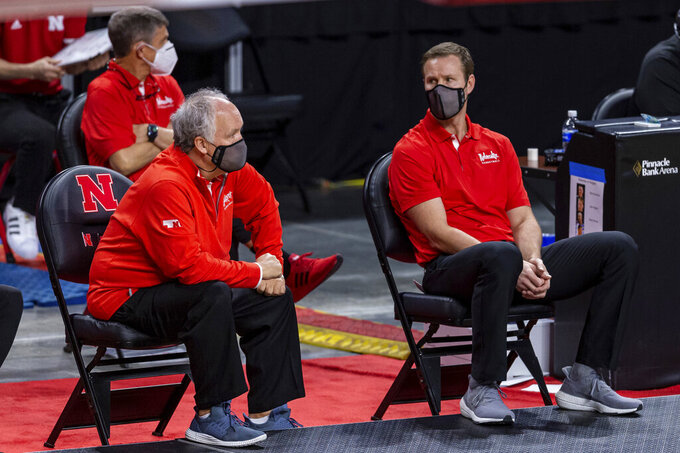 FILE - Nebraska head coach Fred Hoiberg and special assistant to the head coach Doc Sadler watch from the sideline during the second half during an NCAA college basketball game against Rutgers, on March 1, 2021, in Lincoln, Neb. Hoiberg announced on Friday, March 18, 2022, that as part of the restructuring of his men’s basketball staff, the position of Special Assistant to the Head Coach has been eliminated, and Doc Sadler will depart the Nebraska program. (AP Photo/John Peterson, File)

Nebraska coach Fred Hoiberg announced Friday he had eliminated the position of special assistant to the head coach and that Doc Sadler would leave the program.

The folksy Sadler had grown into a beloved figure among fans during his six-year run as head coach from 2006-12. He returned when Hoiberg was hired three years ago, spending the first two years as an assistant and this season as special assistant with no on-court coaching duties.

The announcement came a day after Hoiberg announced he and his chief recruiter, Matt Abdelmassih, mutually agreed to part ways.

The moves are part of a restructuring following three straight 20-loss seasons. The Huskers are 24-67 overall and 9-50 in Big Ten regular-season games under Hoiberg.

Athletic director Trev Alberts had announced last month that Hoiberg would return for a fourth season but that there would be some give-backs in the coach's contract.

The Arkansas-born Sadler, 61, has had a dozen head or assistant coaching jobs, but he always considered Nebraska home.

“Doc has given his heart and soul to the Nebraska basketball program twice in his coaching career, and we appreciate all his contributions to the success of Husker basketball,” Hoiberg said. “Doc has a great basketball mind and has been a valuable resource on our coaching staffs both here and at Iowa State. I wish him nothing but the best in the future.”

As head coach, Sadler was 101-89 overall with three NIT appearances at Nebraska but just 34-64 in conference games. In the Huskers’ final five years in the Big 12, Sadler’s teams never finished higher than seventh. They finished last in his only year coaching the team in the Big Ten.

Abdelmassih had been an assistant for Hoiberg for three seasons at Nebraska and also worked on Hoiberg’s Iowa State staff for five. The two also worked together with the NBA’s Minnesota Timberwolves for two years.

“Matt and I have a close relationship dating back to our time in the front office with the Timberwolves,” Hoiberg said. “He was a big part of our success at Iowa State and played a leading role in building our roster at Nebraska. I wish Matt and his family nothing but the best.”