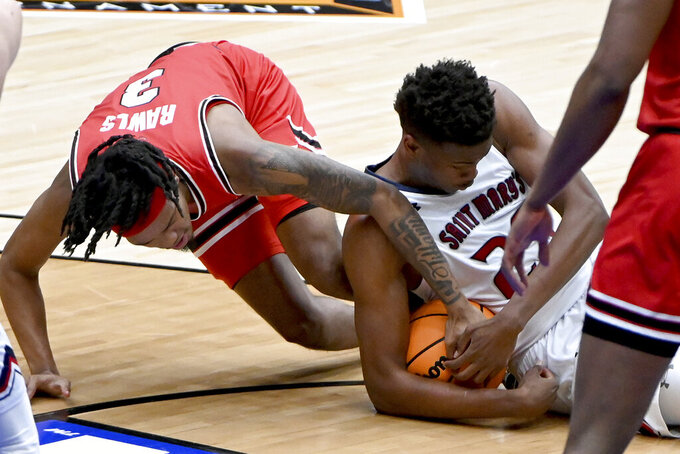 St. Mary's forward Judah Brown (25) takes the ball away from Western Kentucky guard Jordan Rawls (3) in the first half of an NCAA college basketball game in the first round of the NIT, Wednesday, March 17, 2021, in Frisco, Texas. (AP Photo/Matt Strasen) 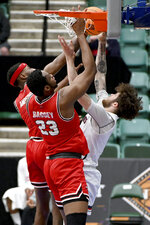 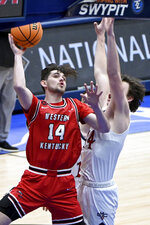 Charles Bassey's dunk with 35 seconds left tied the game after Alex Ducas made a 3-pointer to give Saint Mary's its first lead since midway through the first half. Tommy Kuhse ran the clock down before having the ball tipped away by Josh Anderson and Hollingsworth was fouled in transition driving hard to the basket. A desperation 3-pointer by Matthias Tass missed at the buzzer.

Bassey, the Conference USA player of the year, scored 10 of his 19 points in the final eight minutes and he grabbed 11 rebounds for his 17th double-double this season. Anderson and Luke Frampton added 10 points each.

Kuhse scored 17 points with 11 assists for his second double-double of the season to lead the two-seed Gaels (14-10). Tass added 13 points and Ducas 11.

The three-seed Hilltoppers, the C-USA regular-season champs who lost an overtime tournament championship game to North Texas, will take on the winner of Friday's Mississippi-Louisiana Tech game in a quarterfinal on March 25.