Holmgren powers No. 2 Gonzaga to 90-57 victory over BYU 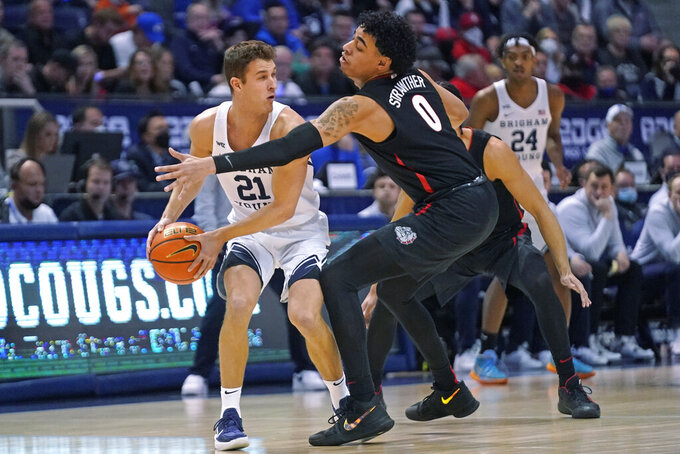 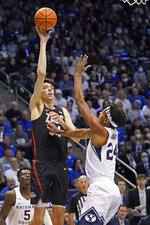 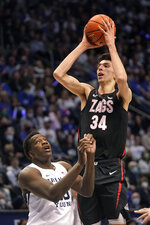 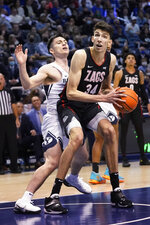 PROVO, Utah (AP) — Chet Holmgren had 20 points, 17 rebounds, six assists and five blocks to lead No. 2 Gonzaga to a 90-57 victory over BYU on Saturday night.

The freshman sensation finished with a season high in rebounds and matched his season best in assists. He scored at least 20 points for the fourth time in Gonzaga’s last five games.

“That’s Chet,” Zags coach Mark Few said. “He does a little bit of everything.”

Julian Strawther scored 19 points and Andrew Nembhard added 15 points and six steals for the Bulldogs (19-2, 8-0 West Coast Conference). Rasir Bolton and Drew Timme each finished with 13 points. Gonzaga shot 57% from the field in the first half on its way to a second dominant win over the Cougars this season.

The Cougars have failed to reach 60 points in back-to-back games.

BYU scored the game’s first two baskets and took a 5-0 lead on a 3-pointer from George. But any upset hopes the Cougars harbored were quickly dashed.

Gonzaga surged ahead with a 27-4 run over an eight-minute stretch and built a 27-9 lead midway through the first half. Holmgren fueled the lengthy spurt with four baskets and punctuated it with his second dunk of the night.

“Chet is one of one,” Strawther said. “There’s literally zero players in the country who can do what he does. He amazes me every time.”

The Cougars struggled to find any rhythm on offense. They made just nine baskets and shot 25% from the field before halftime. BYU misfired on at least six consecutive field goal attempts three separate times.

“You've got to be on point and have a good attention to detail to guard BYU like that,” Few said. “So I’m really happy with that aspect.”

Gonzaga took a 47-17 lead on back-to-back layups from Anton Watson and Nembhard.

The Bulldogs increased the margin to a game-high 38 points eight minutes into the second half when Nembhard capped a 14-0 run with a layup to make it 74-36.

Gonzaga: Efficient offense and tough defense have made the Bulldogs one of the nation’s top teams yet again. Gonzaga certainly sizzled on both ends of the court Saturday and extended its winning streak over WCC opponents to 29 games.

BYU: The Cougars have seriously regressed on offense during their four-game losing streak. An inability to create shots, and turnover woes have taken BYU from being ranked in the AP Top 25 in December to resting squarely on the NCAA Tournament bubble in early February.

BYU’s usual starting point guard, Te’Jon Lucas, did not play. Lucas was held out as a precaution because of lingering neck and back pain. He was injured in Thursday’s 73-59 loss to San Francisco after a defender landed on him at the end of a play.

Nembhard's six steals were the most by a Bulldogs player this season. Gonzaga matched a season high with 12 steals and scored 21 fast-break points.

Gonzaga figures to stay at No. 2 in Monday’s rankings after beating a WCC opponent by double digits for the 26th straight time.