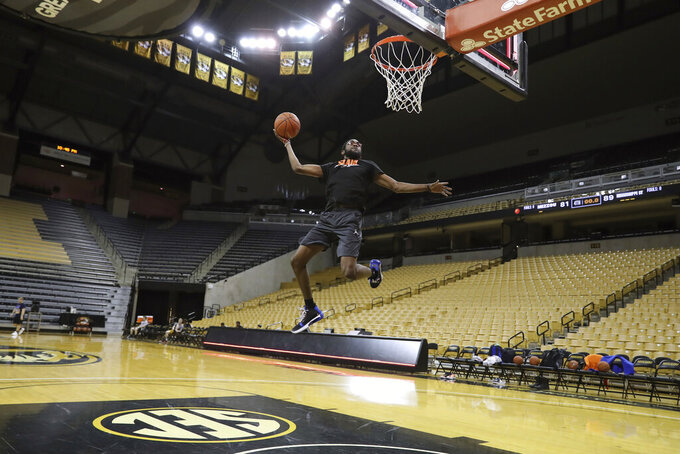 In this Jan. 10, 2020, photo provided by the University of Florida Athletic Association, University of Florida team manager Chris Sutherland is shown warming up before a game between Florida team managers and Missouri team managers, the night before an NCAA college basketball game between Florida and Missouri, at Mizzou Arena in Columbia, Mo. Sutherland waited nearly five years to finally play college basketball. He worked his way onto Florida’s bench in January after serving as an arena worker, a practice player for the women’s team and a team manager for the men’s program. Gaining NCAA eligibility was a daunting task that required him to repay a $5,000 scholarship and remove his name and likeness off a website he created last year to sell streetwear he designed. (Alex de la Osa/UAA Communications via AP)

GAINESVILLE, Fla. (AP) — Chris Sutherland was sitting near the end of Florida’s bench, sandwiched between teammates, when he heard the chants. They were faint at first, growing louder and clearer by the second.

Sutherland had waited years for this moment, a chance to finally play college basketball and complete a journey that started as a kid in Queens, New York, and continued through high school in Fort Myers and well into college.

He should have been ready. After all, he was no stranger to game, the O’Connell Center or even the program. But what should have been Sutherland’s career achievement ended up feeling more like “One Stumbling Moment.”

His warmup jacket got caught on his arm as he hustled to the scorer’s table. An official had to tell him to tuck in his No. 34 jersey, which was the only one without a name on the back. He stood in the wrong spot on the foul line, drawing a dirty look from an opponent. If that weren't bad enough, his wrist band snapped into pieces and delayed the game.

“Why in the world was I so nervous?” Sutherland recalled last week. “There was just so much going on.”

More than most knew.

Sutherland was a graduate student who worked his way onto Florida’s bench in January after serving as an arena worker, a practice player for the women’s team and team manager for the men’s program. Gaining NCAA eligibility required him to pay back scholarship money and remove his name and likeness from a website he created last year to sell streetwear he designed.

“He brings as much positive energy as any player or manager I’ve ever been around,” Florida coach Mike White said. “It is unbelievable. As soon as you walk into the gym, you hear him. It’s crazy. You want guys like that in your program.”

Sutherland was hoping for a few more weeks with the Gators. Then the coronavirus pandemic struck. And with it his shot at playing in the NCAA Tournament.

For Sutherland, it was an abrupt end to a path years in the making.

He turned down several scholarship offers to play college basketball, including one to Division II Belmont Abbey near Charlotte, North Carolina. He chose to stay closer to his mother, a diabetic in Fort Myers, and settled into life as a regular student.

He became a Rowdy Reptile, a member of the raucous student section at men’s basketball games. Little did he know the group would one day be cheering for him.

Still, being in the stands quickly made him realize he wanted more. He became a recreation sports referee and then landed a job working events at the on-campus O’Connell Center. He was promoted to supervisor the following year.

Working a late-night security shift, Sutherland met a student who was a graduate assistant for the women’s basketball team. She told him the team was looking for practice players — regular students good enough to pose a challenge. Sutherland, 6-foot-3, showed up days later and had a side gig.

That got him in the door, but it took longer to get to the men’s side of the facility. An assist came from a fraternity brother, who was a team manager for the men’s team.

“He gave me the blueprint for how you get in, which was to work summer camps,” Sutherland said.

He got the call in 2018 after two summers of work and quickly developed a reputation as someone who brings energy. His post-victory dances were legendary.

He signed on for another year as a team manager after his acceptance to graduate school. Then White and his staff needed an extra body and asked Sutherland to join the team. It was an easy decision, a complicated process.

Sutherland’s parents had to pay back his $5,000 from a student-manager scholarship because walk-ons can’t get funding from the sports program.

Sutherland faced a pile of NCAA compliance paperwork along with various physicals He also had to remove his name and image from his apparel website, WavyTings.com, which he launched last year.

“He had to make a lot of personal sacrifice just to be able to wear the jersey,” White said.

After several weeks, Sutherland was cleared to play in mid-January, a few days before the Gators hosted then-No. 4 Auburn. He was in uniform and on the bench for a nationally televised matchup inside a packed O’Dome.

Sutherland never expected to play. But the game turned into a rout, a 22-point blowout, Auburn’s worst loss of the virus-shortened season.

With 25 seconds left and the student section clamoring for one of its own, White turned and called on the last guy on his bench. Sutherland, despite the blunders, won't forget the feeling.

“Seeing that there are so many people ... just happy for you to succeed in the world we live in, where it’s not common, I appreciated that,” he said. “That really stuck with me.”

Sutherland waited a month to get off the bench again. This time, it was a much smoother outing.

With the Gators leading Vanderbilt by 20 on the night they unveiled “Billy Donovan Court,” Sutherland got the call with 1:40 to play. This time, his name was on the jersey.

He also scored, hitting the second of two free throws.

One point in two games over five years. It might not seem like much, but it’s everything to him.

“The lifelong dream was just to play college basketball,” he said. “I find joy in that.”