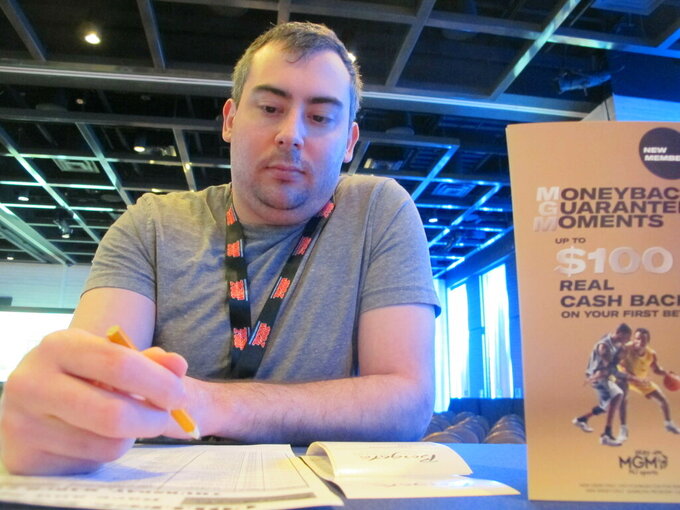 Mike Heusser, of Middletown, Conn., checks off bets he planned to make on the NCAA basketball tournament, Thursday, March 21, 2019, at the Borgata casino in Atlantic City. College basketball fans are lining up at casinos and racetracks, and furiously tapping smartphone screens to get down bets on the March Madness college basketball tournament, in many states where it is legal for the first time. (AP Photo/Wayne Parry)

ATLANTIC CITY, N.J. (AP) — College basketball fans lined up at casinos and racetracks or furiously tapped smartphone screens Thursday to get down bets on March Madness, many in states where it is legal for the first time.

Joe Palumbo of West Babylon, New York, traveled Thursday to the Borgata casino in Atlantic City to bet on Duke to win it all in the NCAA Tournament.

"This is the best time of the year," he said. "It's a hell of a lot more exciting than the Super Bowl. You have 16 games today, 16 games tomorrow. What could be better? There's nothing like it."

This is serious, big business with bettors putting billions of dollars on the line.

"We've been fielding calls since December from people saying, 'What are you doing for March Madness, how can I reserve a seat and a hotel room?'" he said. "We knew the demand was going to be there way in advance."

This is the first NCAA Tournament since New Jersey won a U.S. Supreme Court case clearing the way for all 50 states to offer legal sports betting. So far eight of them do: Delaware, Mississippi, Nevada, New Jersey, Pennsylvania, Rhode Island, West Virginia and New Mexico, where sports bets are done through a tribal compact.

"March Madness is one of the few times every year where the entire sports world is focused on one event," said Richard Schwartz, president of Rush Street Interactive, which operates PlaySugarHouse.com. "In Nevada, March Madness has surpassed the Super Bowl in betting handle, so now that fans can legally bet in New Jersey, we expect it to be one of our biggest mobile and online wagering events."

He said it is a good way for casinos, tracks and online outlets to re-engage gamblers who may have been dormant since the Super Bowl on Feb. 3. And numerous casinos are offering cross-promotions among their in-person and online sports betting operations, designed to generate business on slots and table games, food and beverage sales and hotel stays.

"We anticipate a significant increase in incremental business fueled by not only wagers on the games, but also our non-gaming amenities, including our room packages and Vegas-style fan-cave experiences at The Pool at Harrah's, which are in high demand," said Kevin Ortzman, regional president for Caesars Entertainment in Atlantic City, which operates three casinos there. "March Madness leads into what has historically been one of our biggest nights of the year at Bally's Wild Wild West, during Atlantic City's Beer & Music Festival, so we anticipate a highly successful run over the next several weeks at the books at both resorts."

In Las Vegas, dozens of people were in line waiting to place a bet at the Westgate casino 45 minutes before the first game began. Some still had their luggage with them.

The overwhelmingly male crowd was younger than the one that gathered at the property's sportsbook for the Super Bowl a few weeks ago.

"It's a 'mancation' at its best," said Jay Kornegay, the Westgate's vice president of race and sports book operations. "The Super Bowl is a more mature, older crowd, more couples. March Madness is 99 percent guys, and most of these guys are here on a reunion with old friends, neighbors or ex-coworkers."

Ryan Hamblett of Brockton, Massachusetts, decided to skip the line and used his phone to put money on parlays. He said he made sure his bachelor party trip to Sin City coincided with the start of the tournament.

Kornegay said the average ticket for March Madness is under $50, while for the Super Bowl is just over $200. Duke is the favorite at the property.

Ivetta Abramyan travels to Las Vegas with a group of friends every year for a decade specifically to watch and bet on the tournament. The resident of Jacksonville, Florida said this year she picked North Carolina to win.

"We call it Christmas in March," she said while waiting in line to place bets. "It feels like Christmas morning. It's all about tradition."

Back east, Randy Atiyeh drove from Allentown, Pennsylvania to bet on the tournament at the Borgata in Atlantic City, picking North Carolina.

"It's great that you don't have to go that far now," he said. "The atmosphere is great; you get in line and start talking sports and betting lines and odds with people you don't even know."

Mike Heusser of Middletown, Connecticut, went to Las Vegas last year to bet on the tournament, but was excited to do it this year in Atlantic City, where he picked Duke.

"It's nice to be able to bet on individual games and not worry about one or two games busting your whole bracket," he said.

—Regina Garcia Cano in Las Vegas contributed to this story.