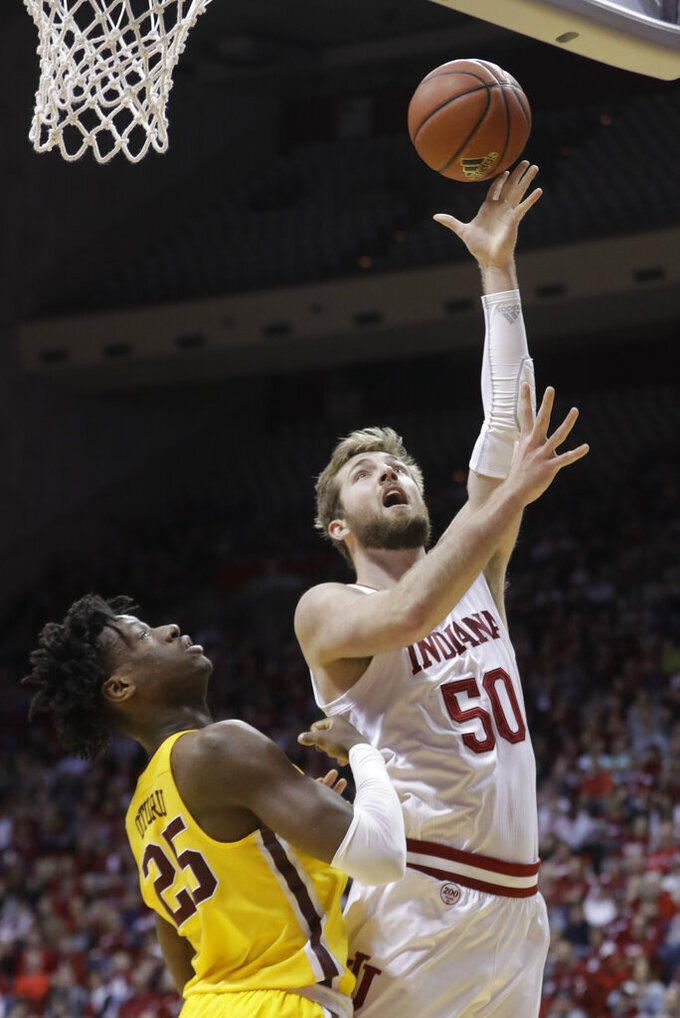 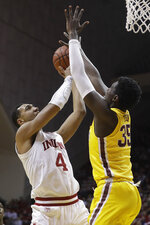 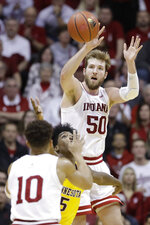 BLOOMINGTON, Ind. (AP) — Joey Brunk spent most of Wednesday night fighting and scrapping against one of the Big Ten's top post players.

His hard work eventually paid off.

“I thought the whole key to the game was Joey Brunk," coach Archie Miller said. “His impact on the game on both ends of the floor, him being able to play as many minutes as he did was huge. He finally got it going on offense a little bit but rebounded as well."

Brunk's resurgence couldn't have come at a better time.

The Hoosiers (19-11, 9-10) ended a two-game losing streak by pulling off its first season sweep of Minnesota since 2015-16 and helps pad their NCAA Tournament resume.

Plus, his breakthrough performance came on a night when Indiana's coaching staff wasn't sure how much — or even if — freshman Trayce Jackson-Davis would play because of a sore foot. Turned out, Jackson-Davis was just fine, finishing with 18 points and nine rebounds in 31 minutes.

But it was Brunk who proved the bigger presence.

He forced Oturu, second in the Big Ten in shooting percentage, into an 11-for-27 night. And it was Brunk who consistently produced the most critical plays.

“His energy, I mean, we needed it in the second half," Hoosiers guard Rob Phinisee said. “We were down by two. Just him bringing the energy, getting those big buckets when we needed it."

Oturu finished with 24 points and 16 rebounds for the Golden Gophers (13-16, 7-12) but it wasn't enough for Minnesota, which has lost three straight and six of seven.

Brunk made sure of it.

His layup with 7:59 to go broke a 54-54 tie and he followed that with a 3-foot jumper. Jackson-Davis then drove in for a dunk and Aljami Durham completed the 9-1 run with a three-point play that gave Indiana a 63-55 lead.

But Brunk and his teammates weren't finished. After Minnesota cut the deficit to 65-60, Durham scored on a layup and Brunk made another short jumper to give Indiana an insurmountable 69-60 lead with 1:48 remaining.

“I thought Brunk was the guy," Minnesota coach Richard Pitino said. “They went after our four spot, those are like two centers in there and he just really made some good plays.”

Minnesota: Oturu had another strong performance. But the Golden Gophers' supporting cast didn't give him nearly as much help as he needed. And with only one game left before the conference tournament, Minnesota now finds itself three wins short of becoming eligible for the NIT field.

Indiana: The Hoosiers desperately needed to turn things around after two poor games last week. This win puts them within one of a .500 conference record, perhaps checking another box on their NCAA resume. And while it wasn't the prettiest win, they did finish the job.

Minnesota: One week after breaking the school's single-season record for assists, Marcus Carr broke the school's single-season assists record in conference play. He passed Ray Williams (118) with five assists in the first half, giving him 119. But he didn't have any assists in the second half and scored just six points. ... Gabe Kalscheur scored 14 points while Payton Willis had nine. ... Oturu posted his 18th double-double this season.

Minnesota: “I thought we fought, it just seemed like we wore down," Pitino said.

Indiana: “I think recently he (Brunk) started to worry a little bit too much about making it rather than getting a good shot," Miller said. “He's nervous that it's not going to go in. Once he got a couple to go down, I think he settled in."