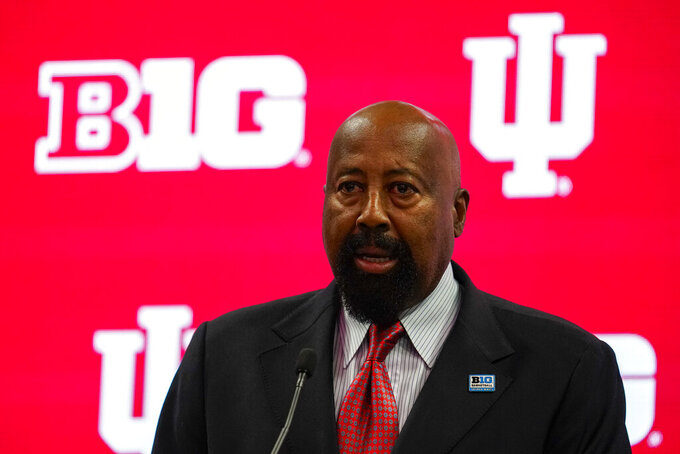 BLOOMINGTON, Ind. (AP) — When new Indiana coach Mike Woodson arrived on campus last spring, he quickly tossed out the stale rules he thought bogged down the Hoosiers on offense.

He wanted his team playing with confidence, taking open shots and embracing a more free-flowing style.

Players quickly adapted to the refreshing changes and now Woodson is betting fans — some of whom may recognize his foundational principles — will appreciate it, too.

“His style is really just pushing the pace, transition offense, trying to get the ball out, less systematic and more motion-oriented where guys are playing different positions and going different places on the floor," forward Trayce Jackson-Davis said. “It’s almost like position-less basketball. That was a big adjustment for me."

Woodson wants to use this season to lay the foundation for putting Indiana back on college basketball's national map after five consecutive seasons without a winning record in conference play or making the NCAA Tournament.

That's a stark contrast to the program Woodson first joined in 1976.

Back then, the Hoosiers were the defending national champions, coming off a perfect season. Woodson helped lead Bob Knight's 1978-79 team to the NIT title, then watched some former teammates claim the 1980-81 NCAA championship after he'd moved on to the NBA.

Woodson insists the Hoosiers can return to the top and already has some key cogs on this season's roster.

All three, Woodson believes, can thrive in this modernized offense that gives players freedom to do more. It was enough to convince Jackson-Davis to return for his junior season, and when Woodson told forward Race Thompson he could do more this season, Thompson also opted to come back.

“He said, ‘I want you to play basketball,’” Thompson said. “He said, ‘If you show me you can do this, I’m going to let you do it' and that was something that was exciting to me.”

The result: Woodson said he saw a vastly different Thompson during a summer trip to the Bahamas than the one he'd heard about.

Woodson wants his team to follow Thompson's lead by disproving the doubters.

“I’ve never been a coach that kind of locks a guy in a box and says, ‘Hey, you stay in the box, this is the only area you can play in,’” Woodson said. “I think everybody that’s been in uniform so far has had the freedom to play. “

Phinisee came to Indiana three years ago with an all-state resume and high expectations. But after making a buzzer-beater to knock off Butler in December 2018, Phinisee's progression has been stunted by injuries.

Now he's being challenged by Johnson and Lander, who like Phinisee was a highly touted in-state recruit. So Phinisee revised his offseason routine, starting with a fresh outlook on life.

He read “Intentional Mindset: Developing Mental Tenacity and a Killer Instinct” and continues to work on his mental approach almost daily.

“I have the Calm app and try to do that like every day,” he said. “Really, I feel like there are things you do in the morning that starts your day off right and gets you right. That book really helps me.”

Johnson averaged 14.2 points and 5.7 assists at Pittsburgh last season and is one of several experienced newcomers at Indiana.

Indiana also will see guard Parker Stewart, who transferred from UT-Martin in January after starting his college career at Pittsburgh.

Woodson makes his college coaching debut Nov. 9 against Eastern Michigan and faces his first big tests with road trips to Syracuse on Nov. 30 and Wisconsin on Dec. 8. Ten days after playing the Badgers, Indiana heads to Indianapolis to meet Notre Dame in the Crossroads Classic.

But the key to this season could be a a three-game January homestand — Jan. 20 against No. 7 Purdue, Jan. 23 against No. 6 Michigan and Jan. 26. against Penn State.